Posted on June 19, 2010 by Terence Comments Off on NBA Finals perform a ratings slam dunk 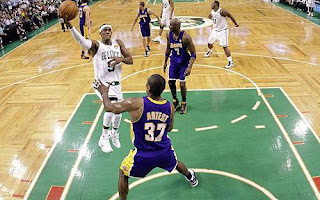 Viewers fled into the entrances for Game 7 of the NBA Finals between storic rivals the Los Angeles Lakers and the Boston Celtics and blew the competition out of the water.

The game drew 28.2 million viewers in final ratings released Friday afternoon, marking it as the most-watched NBA game since Game 6 the 1998 NBA Finals, which the Michael Jordan-led Chicago Bulls beat the Utah Jazz to win their sixth (and last-to-date) NBA Championship.

The Lakers beat the Celtics to win their sixteenth NBA title, their second straight, and their fifth title in the last eleven years.

Overall, the NBA Finals averaged 18.1 million viewers this year, up 26 percent from last year (when the Lakers’ opponent was the Orlando Magic) and the highest-rated Finals since 2001, when the Lakers beat the Philadelphia 76ers for the NBA Championship.

For some great ratings info on the NBA Finals from past years – and how they stack up compared to this year’s finals, click here.

– On a side note, if you have watched the NBA Finals this year, you may have noticed a lot of audio drop-outs during most of the games. Many people thought it was a problem with their satellite or cable provider, but it was also prevalent on the over-the-air HD broadcasts as well (the method yours truly watched the games since the money-grubbers at Comcast charges for a HD upgrade.)

Turns out the dropouts were actually from a dump button ABC and ESPN used to prevent profanity from making the airwaves, in which the Parents Television Council praised the networks for doing (but apparently failed to note the rioting and criminal acts that took place in Los Angeles immediately after the Lakers won the championship.)

But this Comedy Central-type move made watching the NBA Finals an unbearable, annoying, and frustrating  experience for yours truly and most other NBA fans.

So I guess its more important for Disney (the parent company of ABC and ESPN) to appease the jack-booted hypocrites at the Parents Television Council and the FCC instead of the NBA fans who watch the games – just like Comedy Central appeasing Muhammad protesters when the network bleeped the dialogue of two South Park episodes and later puled the episodes from circulation.

Don’t you just love the cowardly actions of Big Media?