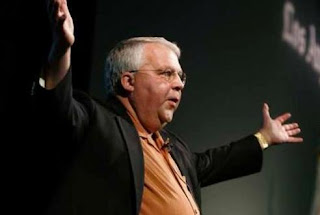 In a move that took everyone by surprise, Emmis Communications sold controlling interest in WLUP-FM (The Loop) and WKQX-FM (Q101) and a New York City station (WRXP-FM) to a constroium headed by former Tribune Co. CEO Randy Michaels and Chicago-based equity group investement group GTCR, Inc.

The news was first reported yesterday as a tip on Robert Feder’s Time Out Chicago blog.

Merlin also has launched a website, which basically a placeholder for now.

Emmis’ other New York properties, including Hip-Hop/R&B outlet WHQT-FM (Hot 97) and Urban AC WRKS-FM, are not included in the deal and Emmis is retaining full ownership of both properties. Emmis purchased Q101 in 1988 from NBC, when it still was a Pop Adult station (a forerunner to today’s Hot Adult Contemporary format.) WLUP was acquired by Emmis in 2005 after swapping stations in Phoenix with Bonneville Broadcasting. Rock outlet WRXP was acquired by Emmis in 1998.

While changes are not expected at WLUP or WRXP, WKQX could be getting a complete overhaul: Merlin is expected to drop the Alternative Rock format which has been present in one form or the other at the station for the past 19 years and launch either a all-news or a news/talk format – meaning the current staff at Q101 is unlikely to be retained.

It’s a huge blow to the Alternative Rock format, which is now left with no full-signal station in the nation’s third largest radio market. Q101 switched to Alternative Rock from Hot AC in the spring of 1992 and was an instant success, riding high on the popularity of grunge music at the time.

At one time, Q101 was in a heated rivalry with ABC’s WZZN-FM (94.7), which flipped to Alternative in September 2001 to take them on and the volley between the two made headlines in the industry – with some comparing it to the WLS-WCFL Top 40 wars of the early 1970’s and the WBBM-WYTZ Contemporary Hit Radio wars of the late 1980’s (ironically, ABC also owned WYTZ, which was also on the 94.7 frequency.) In 2003, The Zone adjusted its format to Active Rock, but folded in September 2005 leaving Q101 as the victor.

While Q101 was successful in attracting a young male audience and had decent billing, the station was doing poorly overall, tied for 22nd in the latest PPM reports. On the other hand, WLUP’s ratings have grown since a format adjustment in January, finishing 16th overall in those same reports. The lackluster ratings for both stations showed up in the balance sheets: Emmis was bleeding in the red locally and there has been speculation building for the past year about the potential sale of both stations.

For Randy “Court Jester” Michaels, he returns to the Chicago media scene in a bigger force than expected. Michaels left the Tribune Co. in disgrace last year amid allegations of lewd conduct within the walls of the Tribune Tower – some of the shenanigans described in a new book written by former Tribune employee Jim O’Shea. Michaels also hired many of his ex co-workers/cronies at Jacor/Clear Channel like Lee Abrams, one-time Howard Stern-boss Kevin “Pig Virus” Metheny, and countless others. The Court Jester is best known for his remarkable turnaround of Tampa’s WFLZ in 1989 and basically re-writing the book in taking on – and taking down a competitor. Unfournately, he fell flat on his face in Chicago when he tried to re-invent flagging WYTZ in 1991 by renaming it “Hell 94.7”. It lasted a week, with the CHR format exiting the station later that year.

But in a business that seemingly rewards failure (see Katie Couric and Jay Leno), Michaels’ resurgence was a given. Nobody expected it to happen this soon.