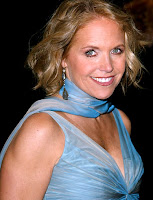 “I failed at doing the CBS Evening News. Now ABC is going to reward me with a big contract for doing a talk show no one will watch. Suckers!! “

On Monday, Katie Couric joined The Walt Disney Company as a syndicated talk show host in what has to be the worst syndicated deal ever. The multi-year, multi-platform deal also has Couric as a regular contributor to ABC News, where she’ll appear on the network’s news platforms.

Yes, this is the same Katie Couric who flopped as an anchor for the storied CBS Evening News, which was in last place during the duration of her run. She departed the show on May 19.

And guess who’s on board as executive producer of Couric’s new show? None other than former NBC exec Jeff Zucker, who nearly brought the network down with his boneheaded decisions.

It’s just another example of how the media business rewards failure. But don’t be surprised – we Chicagoans are used to it – the Cubs and Bears reward failure all the time. It explains why Jay Cutler, Lovie Smith, and that Marmol pitcher on the Cubs still have jobs (it also explains why current WFLD news director Carol Fowler keeps getting work.)

Yeah, yeah, I know – Couric and Zucker worked together at NBC’s successful Today Show back in the 1990’s. But this is a “what you have done for us lately” business. Since both left Today, Couric and Zucker haven’t really done anything worth noting.

No point investing in fresh new talent when you can grab today’s has-beens, thrust them in front of and behind the camera, and call this bullshit a success with a 1.0 rating. Even local stations aren’t buying this game anymore, as local station GMs are having doubts on whether Couric can succeed (see Jane Pauley’s venture into talk show hell a few years ago.) If viewers didn’t want to see Couric anchor the news, why would they want to see her host a talk show (though admittedly, her talker would likely be in the vein of Oprah, and viewers would like to see Couric more in that type of role.)

Even more stupefying is how this deal came about.

ABC announced it has cleared Katie at 3 p.m. time slot on all eight of its owned stations, including WLS-TV in Chicago, where it would be replacing long-time ratings winners Inside Edition and Jeopardy! (to see the full list of programs the ABC-owned stations are airing at 3 and 4 p.m., click here.) But at the same time, the network announced it was giving the affiliates the time slot back to program – and hoping ABC affiliates pick up Katie.

Yep, ABC is giving the 3 p.m./2 p.m. Central time slot so the affiliates can program themselves. But there’s no doubt ABC’s syndication division will pitch their own affiliates first before going to NBC and CBS stations. Good grief, wouldn’t it be easier to put Couric’s talk show on the network at 3 p.m. (ET) instead?

Simple. ABC and Couric thinks it can make more money going the syndication route rather can clearing it for free on their own network.

There was actually something on the books back in the day that would actually prevented all of this. Called the Financial Interest and Syndication Rules (or fin-syn for short), the rules kicked the networks out of the syndication business, prevented them from owning programming in prime-time (existing programming was grandfathered), and kept them from acquiring or merging with major studios. Created in 1970, the rules were were done in 25 years later by the rise of Fox, cable, satellite TV, and the Internet. And with those rules gone, we see lots and lots of vertical integration, which has stifled creativity and unleveled the playing field.

But the real loser in all of this is the longtime soap General Hospital.

The 48-year soap could be axed if the replacements for the already canceled All My Children and One Life to Live succeed in the ratings.

ABC said it would “continue to support” GH, but we all know this is a cock-and-bull story. The reason ABC canceled the two other soaps were because of high production costs and declining ratings (or so they say.) Even with lower ratings, the two lifestyle shows – The Chew and The Revolution – would be cheaper to produce than soap operas and could make a profit – even with lower ratings because of lower production costs. And even if one or both of the series fail, ABC could easily come up with new programs in the lifestyle genre to replace them – General Hospital getting even one of those spots isn’t guaranteed.

And General Hospital’s recent ratings performance doesn’t help its cause either. Neither does the decision not to renew the contract of actress Vanessa Marcil, who returned to the series last year after stints in prime-time shows including Beverly Hills 90210 and Las Vegas.

So rewarding failure is commonplace in media, in sports, in life. If Katie Couric fails at this new venture (or more likely, her show loses a boatload of money five years from now), look for ABC to replace her with former Will & Grace co-star Megan Mulually, whose talk show expired after only a few months in 2006. If it were up to these fools, she would probably get another shot. And why not? Former NBC exec Ben “Party All The Time” Silverman would be producing.