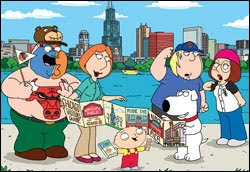 Soon, “Family Guy” will have TWO places to call home in Chicago.

In a rather odd twist to a renewal deal, Tribune-owned WGN-TV has renewed syndicated repeats of Family Guy for a second cycle in a new four-year deal through 2015, which kicks in on September 12, 2011. But as a part of the deal, Weigel-owned independent station WCIU-TV will also strip the series in another daypart.

In addition, WCIU picks up American Dad as a strip for fall 2011, and to air as an one-hour all-barter block this fall.

This is a part of a larger syndication deal Twentieth Television made with stations yesterday involving both Seth MacFarlane-produced shows. Twentieth has renewed Family Guy on incumbent Tribune and Fox stations covering 40 percent of the country, along with American Dad. Tribune stations renewing Family Guy include WPIX-TV in New York, KTLA in Los Angeles, WPHL-TV in Philadelphia, KDAF-TV in Dallas, and KIAH-TV in Houston.

On the Fox O&O side, renewals include WFTC in Minneapolis-St. Paul, WRBW-TV in Orlando/Daytona Beach, and KUTP in Phoenix. All three are affiliated with My Network TV.

The deals for Family Guy are for cash/barter – a huge plus for the syndication business, which has seen an abundance of all-barter deals thanks to the sagging economy. In all-barter deals, stations pay no cash, but give up half of their commercial inventory to the syndicator so it can be sold to national advertisers. The commercial split for Family Guy remains the same – three 30-second spots per day withheld by Twentieth for national ad sales; stations get eleven 30 second spots to sell themselves for local or spot advertising.

Family Guy currently ranks second among all off-network sitcoms with barter, behind only Warner Bros. Two and a Half Men. The program does very well with young audiences, particularly in hard-to-reach male demos.

As for the Chicago deal, it marks the first time two competing stations (excluding duopolies) will share the rights for a fairly recent-to-market off-network sitcom. But while the occurrence is unusual, two broadcast stations sharing syndicated programming has actually happened before in other markets.

In 1990, Boston’s ABC affiliate (WCVB-TV) and then-syndicator Viacom sold-off The Cosby Show to Fox-owned WFXT for the reminder of its five-year deal, with the program being stripped on WFXT weeknights while WCVB retained a weekly episode to air in prime-time. The Hearst-owned station bought Cosby reruns in 1986, but suddenly had nowhere to put it when it debuted in syndication in 1988. So, it ran the program on weekends in vertical blocks for two years, losing more than $2 million – on top of the tens of thousands of dollars it already paid for the pricey sitcom (in a rather ironic twist, Cosby Show recently returned to WCVB’s schedule, where it airs at 2:06 a.m.)

In 1992, CBS affiliate WRAL-TV in Raleigh, N.C. – which stripped Cosby Show at 5 p.m. with little success – scaled back its airings of the program and let WLFL-TV carry the show while retaining a weekly airing until its contract was up a year later.

In the 2000s locally, CBS-owned WBBM-TV and then-UPN affiliate WPWR-TV shared airings of Judge Judy for about a year or so.