"Bob’s Burgers" back for a second season 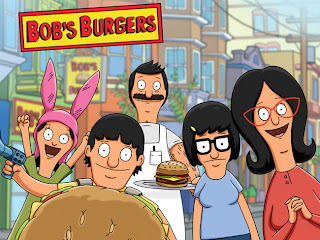 Serving up burgers in a restaurant is just as hard as serving up laughs – but Bob’s Burgers may have made it work.

In a surprise move, Fox has picked up thirteen more episodes of Burgers for its second season, which is likely to commence early next year.

While ratings for the series does lag behind those of its lead-in (The Simpsons), Burgers recently hit a series-high 2.2 adult demo rating, not counting the January 9 premiere.

This marks the first time ever a non-Seth MacFarlane or non-Matt Greoning animated has been renewed at the network since King of the Hill. In fact, several principals who were behind King (Loren Bouchard and Jim Dautrieve) also work on Bob’s Burgers.

The premise of the series is about a father who tries to keep his burger joint afloat while dealing with his three underachieving kids (and those kids are a hoot.)  In yours truly’s opinion, Bob’s Burgers stands above the other series on Fox’s Sunday night lineup and injected fresh life into what was becoming a very monotonous and bland Animation Domination block (and its far better than Scooby-Doo, Mystery Incorporated.)

Earlier, Fox picked up a renewal for another live-by or die-by-the-season series, American Dad, which is coming back for its eighth.

– In other news on the adult animation beat, the recently-renewed-by-Comedy Central Futurama has now cleared 90 percent of the country for a weekend block in broadcast syndication this fall by Twentieth Television. Clearances include WCIU in Chicago, and Tribune’s WPIX in New York and KTLA in Los Angeles.  Recently, Comedy Central renewed Futurama for two 13-episode seasons, which takes the series through 2013. The next installment of new episodes begin in late June.

3 thoughts on “"Bob’s Burgers" back for a second season”