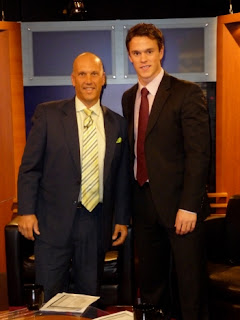 Presents under the tree:

New deals for David Kaplan.  Santa has been very good for Chicago media personality David Kaplan: he just secured a new deal with CSN Chicago, which enables him to continue hosting the sports net’s Chicago Tribune Live and Cubs’ pre- and post-game shows – not to mention returning to WGN Radio as weeknight host for WGN Sports Night starting this Thursday. This guy has it going on!

The Sing Off. America seems to love groups of singers competing against each other in December for some reason – a 3.3 rating last week in adults18-49 isn’t nothing to sneeze at (however, the finale Monday night drew only a 2.7, down 18% from last week.)

New digital nets for classic TV fans. With the recent national launch of MeTV and the January 1st debut of Antenna TV, it’s the best presents fans of the genre can ask for.

Coal – and lots of it

Drex. After seven years, Chicago’s WKSC bounced the morning personality out of a job – just like Santa does when one of his elves isn’t performing up to par.

Survivor: Nicaragua. An incredibly lame season comes to a close with an outcome that’ll make a Cubs fan cringe: a St. Louisan wins the title of Sole Survivor and a million dollars. And what was up with the crowd’s lame reaction at the reunion show in Los Angeles when NaOnka’s antics were screened (with many even cheering at one point?) Did they think they were at a Lakers game? Man, if only this program was held in Philly… and to top it off, the finale was the lowest-rated ever, buried opposite the Packers-Patriots game on Sunday Night Football. And props to Jimmy Johnson for being a class act. As for Dan… wow what a prick.

The New Hawaii Five-O. During an episode that aired last week, McGarett went into an underground vault to “borrow” $10 million to pay a ransomer. So when McGarrett drove to an undisclosed location and delivered the money to the extortionist, did you know what the extortionist did? He threw the the $10 million into a burning fire, then proclaimed “it’s not about the money.”  WTF? If this doesn’t scream Jump the Shark, then I don’t know what does. Goes to show you the criminals on the original Hawaii Five-O were a lot smarter back in the day – not to mention the writing staff.