Metheny, Laski out at WGN Radio

Posted on November 12, 2010 by Terence Comments Off on Metheny, Laski out at WGN Radio 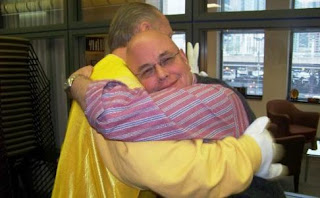 This farce starring Randy “Court Jester” Michaels and Kevin “Pig Virus” Metheny running WGN Radio would equal a sitcom where everyone is a boob and feature a laugh track. In fact, there was such a sitcom: WKRP in Cincinnati was certainly one of the best sitcoms of its era, in writing, acting, and production and told what really went on behind-the-scenes at a radio station.

Unfortunately, this real-life sitcom starring Court Jester and Pig Virus was only about as funny as an average episode of Webster and Punky Brewster (you can hear the canned laughter now…) Hence, the above photo and caption…

In news that has WGN radio fans jumping for joy across Chicagoland and the rest of the nation, the owner of WGN Radio fired Program Director Kevin Metheny and evening host James Laski Thursday evening.

The departure of Moo & Oink came as no surprise as Randy Michaels was shown the door three weeks ago as CEO of Tribune Co., as it was Michaels who brought Metheny into WGN Radio as the station’s new PD in December 2008. Earlier, Chief Innovation Officer Lee Abrams was let go after he circulated a racy e-mail featuring links to not-safe-for-work videos. Basically, the cancellation clock was already ticking on Metheny the moment Michaels was let go.

During his tenure, Metheny – who was once Howard Stern’s boss at WNBC-AM in New York City and Stern was the first to refer Metheny as “Pig Virus” – lived up to his controversial billing and then some. In addition to bringing in Laski, he also brought in Mike McConnell from WLW-AM in Cincinnati where he was known as a polarizing talk show host. When listeners weren’t calling in to his show, Metheny had station employees call in posting as regular listeners. Under his watch, he also changed the station’s moniker to News 720 – never mind the station technically wasn’t all-news. Not surprisingly, his polarizing personality – which he had flaunted throughout his career – alienated employees at WGN Radio. For example, Metheny told radio personality Steve Cochran he was fired – as Cochran was exiting the Men’s bathroom.

While WGN did remain in the top five overall during Metheny’s stint as PD, ratings in the all-important 25-54 demos were below 20th place and dropping – and ratings in one of the few demos it does well – the 55+ audience – were starting to decline. Cancellation of popular shows like Sports Central didn’t help.

Local media website Chicagoland Radio & Media put together this list of “sins” Metheny was known to commit during his nearly two-year tenure at WGN (for two years, that’s quite a lengthy list! Who else can alienate people in such short amount of time?)

Meanwhile, The Jim Laski Show was ferociously panned by critics, as the former Alderman (representing the heavily Democrat – but politically conservative 23rd Ward in the Clearing and Garfield Ridge neighborhoods of Chicago) and City Clerk showed his inexperience in hosting a radio talk show – not to mention his stint in prison for his involvement in the Hired Truck scandal and admitting to drug and alcohol abuse. The program never caught on with listeners – but despite the challenges, Metheny stuck with the show and even used Laski as a fill-in host.

For the time being, WGN plans to use the evening time slot vacated by Laski with fill-in hosts on nights when there isn’t a Blackhawks game.

With the departure of Laski and Metheny, WGN Radio took the first step in restoring the station’s respectability and image. Apparently, the cure for this Pig Virus infecting WGN Radio was someone at Tribune who finally decided to put a stop to this nonsense by canceling the Moo & Oink Comedy Hour – because this sitcom just wasn’t funny.

And the joke was on WGN’s listeners.