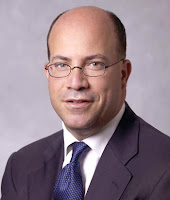 Don’t hit your… out the door…

In news that will make TV junkies across the land jubilant, NBC Universal Chairman Jeff Zucker exited the network today after 24 years.

But just how he left is a matter of what publication you read: Broadcasting & Cable’s headline was Zucker leaves NBC; but on the Deadline Hollywood site, the headline splashed on the page was Jeff Zucker Fired by Steve Burke. (Mr. Burke is Comcast’s Chief Operating Officer.) Zucker’s departure is effective when Comcast takes over NBC, assuming approval by regulators.

Zucker has been the fall guy for NBC’s recent lack of success, including six consecutive last-place finishes among the four major networks. He sent the NBC Universal staff a final e-mail this morning, thanking them for their service and support.

Zucker rose through  the ranks at NBC, starting in August 1986 (after NBC was acquired by General Electric.), when he was hired in the network’s research department. Six years later, he became the executive producer of Today. In 2000, he was promoted to head of NBC Entertainment, became NBC Universal Television Group CEO in 2005, and succeeded Bob Wright as NBC Universal President and CEO in 2007.

Early in his tenure in management, NBC was riding high with mega-hits Friends, Fraiser, and Seinfeld.and ER But by 2004, those programs except for ER were gone and the network was unable to develop any hits to replace them.

Since 2004, the network developed some a few hits – notably Heroes, The Apprentice, and Deal or No Deal – but those shows would run out of gas quickly. And as far as bombs go, last-year’s Jay Leno Show in prime-time clearly took the cake.

And Zucker was the villain in Conan O’Brien’s much publicized departure from the network when Leno wanted The Tonight Show job back.

But there were some highlights during Zucker’s time at the peacock: its cable-owned networks produced a lot of revenue, and many of them produced hits like Battlestar Galactica (SciFi), The Real Housewives (Bravo), and The Bad Girls Club (Oxygen). Its syndication division (NBC Universal Television Distribution) chugged along with Access: Hollywood, Maury, Jerry Springer, and successfully launched The Steve Wilkos Show. But launching Deal or No Deal in syndication didn’t work, and The Martha Stewart Show stayed on the air longer than necessary.

And even Madison Avenue ad buyers think NBC prime-time is better off without Zucker at the helm.