Posted on October 2, 2009 by Terence Comments Off on We lose 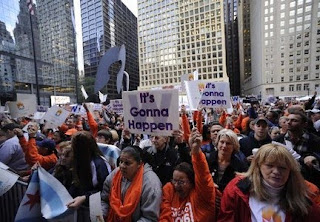 Even though yours truly provided lukewarm support for the Chicago 2016 effort, I am just as shocked and stunned as everyone else in our inability to land the Olympic games. It kind of reminds me of a rather laugh-free Simpsons episode where Bart did an offensive stand-up routine at Springfield’s Olympic Presentation where International Olympic Committee  members were present and as a result, the city lost its chance to host the games.

Perhaps if Chicago’s delegation watched that episode, it never would have let Jim Belushi performed before the IOC before the vote…

On paper, it looked like it couldn’t miss – you had the mayor, you had Oprah, you had President Obama, and at least one hundred other people who pitched the games to the IOC.

But like Scott Norwood kicking a field goal in Super Bowl XXV, the effort went far right.You wonder if Bart Simpson “showed up” to do his “stand-up” routine. I think we were better off.

Chicago received the least number of votes – just eighteen, which knocked the Windy City out in the first round.

Already, they were theories on why Chicago didn’t win… the violent beating video that surfaced last week… the city’s outdated – and unreliable – public transpiration system… The rampant corruption in the city… lingering anti-American sentiment around the globe… Chicago still being one of the most segregated cities in the nation among race… Daley… those stupid Cubs fans bringing those inane “W” and “it’s gonna happen” signs (it didn’t work for the Cubs last year…)… Ozzie Guillen (from Jay Mariotti’s perspective)…

And Chicago isn’t just a loser in all of this… so are the major television networks, advertisers, and marketers in the United States. The networks are now likely to pay less for an Olympics in 2016 since it will not be based here. While paying less for the games looks good on paper, unless there’s another Michael Phelps on the horizon, viewers – especially those not into the Olympics –  would be less likely to tune in.

But the big kicker here is… Chicago’s media outlets will miss out on millions and millions of dollars of ad money pouring in. It would have created jobs and created revenue for Chicago’s television, and radio stations – all of which struggling from a downturn in the economy amid hundreds of job layoffs – not to mention the bankruptcy of the Tribune and Sun-Times.

And this what hurts the most.