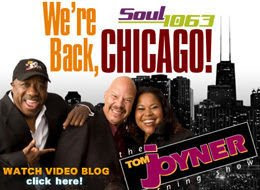 It’s official: The Tom Joyner Morning Show, which was bounced off of WVAZ-FM (V103) after 13 years last month, is heading to WSRB-FM (Soul 106.3) effective Wednesday (and was predicted here – and well, everywhere else.)

No details were available on the terms of the deal between The Fly Jock’s syndicators (Reach Media and Radio One) and Crawford Broadcasting, the owner of WSRB-FM as well as urban contemporary WPWX-FM (Power 92.). But one thing is for sure – TJMS will be stripped every weekday morning from 5 a.m. to 9 a.m. and a weekend version (featuring the week’s best bits) wil run Saturdays from 9 a.m. to 11 a.m.

On his blog at blackamericaweb.com, Joyner was more than ecastic about his return to the Windy City – a place he caled home for many years. He credits the show’s fan base in Chicago for pressing WSRB to pick up the show via writing letters and tweetering.

Thought: Yours truly said WSRB should pick up the phone and grab this show after WVAZ dropped The Tom Joyner Morning Show. They listened. And they did it.

No, no, no, don’t thank The T Dog Media Blog for making this happen… Okay, maybe yours truly had a small part to play in bringing the TJMS back… But seriously, the fans of the show had a major say in WSRB picking up the strip after WVAZ dropped it. And now with Joyner on board, WSRB has gone from an also-ran right into the game.

What WSRB needs to do now is to hold on to those Tom Joyner listeners throughout the day. While it already has the syndicated Michael Baisden in the afternoons, it needs live personalities in the mornings and evenings – not to mention improvement to its signal, which does not cover all of Chicagoland.

Oh – and welcome back, Tom.