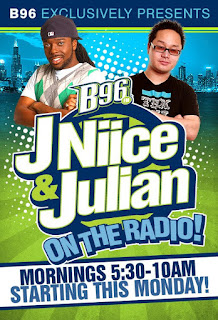 Contemporary-hit music outlet WBBM-FM (B96) has named Jamar “J-Niice” McNeil and Julian Nieh as the station’s new morning hosts, replacing Eddie Volkman and Joe Bohannon, who were let go from the CBS-owned radio station on Novemeber 21.

McNeil had previously been the station’s midday jock, while Nieh was working on the evening shift.

Both men are alums of WIHT-FM in Washington, D.C., where they once worked together. McNeil later worked for Clear Channel’s WHYI-FM (Y-100) before moving to the midday slot at B96 this past spring, while Nieh was named B96’s evening host two years ago.

The move is already drawing praise from many on Internet message boards, given the two men show more proise than the current afternoon duo (Stylz and Roman), who, according to some, were also considered for the job.

Rebecca Ortiz is replacing McNeil in the midday slot for the time being, and Andrew Wojtowicz fills in for Nieh on an interim basis in the evenings.

Thought: Certainly, Chicago radio has made so many wrong moves in 2008. This isn’t one of them (surprise!) Given both men – who knew each other beforehand in D.C – is going to work in their advantage. While they have big shoes to fill, McNeil and Nieh should have no problem getting up to speed quickly.

Though J Niice and Julian will have to prove themselves in morning drive, they have a very good chance to be better quality-wise than the tired Eddie & JoBo show (especially with Erica “Cousin Oliver” Cobb in the mix.) Don’t me wrong – yours truly didn’t like the way they were shoved out the door – but it was time for them to go.

Here’s to the J Niice and Julian morning era at B96! Hopefully, they’ll find the same success Eddie & JoBo have had in their long careers in the same morning slot.