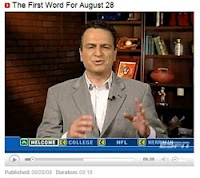 The first word and the last laugh: Au revoir, patsy…

If Jay Mariotti was a TV character, he would rank up there with J.R. Ewing, Alexis Carrington, Johnny Fairplay, “Q” from Star Trek: The Next Generation, and Vince McMahon – as the most loathsome people to ever grace the tube.

So it comes as no surprise when he resigned as columnist of the Sun-Times, everybody in Chicago celebrated by blasting the song “Celebration” by Kool & The Gang from their stereos.

The dripping barf bag left last week after 17 years to pursue a career in… well, I don’t know. I don’t think he knows, either.

So why did Mariotti leave the Sun-Times? According to him, he proclaimed the newspaper business was going down the drain, and “I don’t want to go down with it.”

Wow, what a classy statement. While this is true, this is a guy who recently signed a three-year extension to stay with the paper. And what a perfect time to leave, too – after scoring a free trip to China to “cover” the Olympic games.

Mariotti now proclaims the Internet is where sportswriters need to be instead of “the sinking ship of newspapers” – never mind just a few years ago, he ripped into bloggers and criticized Internet journalism in general. This guy flip-flops more often than a worn-out pair of shoes.

And the real reason why he resigned may have something to do with a topic regarding Barack Obama and his allegiance to the Chicago White Sox. According to sources at the paper, Mariotti was passed over for the assignment to write about Obama and instead was handed to Rick Telander, whom he often feuded with. He reportedly threw a fit and resigned (If Mariotti got to write the column, he would’ve bashed Obama for being a White Sox fan.)

So apparently, he lied about why he left the Sun-Times. No surprise there.

And the Sun-Times doesn’t seem to miss him, with editor-in-chief Michael Cooke proudly boasting: “We wish Jay well and will miss him — not personally, of course, but in the sense of noticing he is no longer here, at least for a few days.” (Oh, now you guys get it.)

One person even decided to return to the Sun-Times now that Mariotti’s gone. He was featured on the front page a day after he left.

Now the human garbage disposal is running his mouth on his stupid TV show at ESPN and in interviews with other media outlets, and he’s talking about how bad the Sun-Times treated him. So what else do you expect from a guy who is a pathological liar, battles with people he works with, criticizes teams – even when they are playing well – and on and on and on…

In the Tribune last Friday, Mariotti says his loyalty to the Sun-Times should be measured by the columns he wrote over the last 17 years.

What a crock of bullshit.

He left the Sun-Times by declaring papers “dead”, and proclaiming himself better than they are, or any of the hard working employees at the rag who at least try to put out a decent product. And he has the nerve to talk about loyalty.

And his former colleagues noticed by taking swipes at him, from Roger Ebert to Chris Deluca.

And those columns? 17 years of mostly lies, personal attacks, deceit, and tearing down people. This piece of human garbage always wrote nasty things about Chicago athletes. While some of it was warranted, much of the time, it wasn’t. And he was always extra-hard on minority athletes and coaches, particularly Allen Iverson, Cedric Benson, and Gold Medal speed skater Shani Davis.

And its interesting he refused to go into the clubhouses of the teams he covers… Is it because he feared he probably would’ve been decked by someone there? If so, Mariotti more than deserved it.

And what about this feud with Reinsdorf? While some of his criticisms of the White Sox and Bulls owner was sometimes warranted, he often crossed the line into dissing him and his teams, even during the Bulls championship runs and the White Sox World Series run of 2005. Never mind while Reinsdorf presided over six Bulls Championships and a White Sox World Series Championship, the late Blackhawks owner Bill Wirtz blacked out most home games on TV, raised ticket prices, and fired a popular play-by-play man while the team nearly plummeted off the face of the earth. And all of this didn’t even garner half the attention from Mariotti. And when Wirtz died, Mariotti had the nerve to rip into Hawks fans for their “lack of respect”. Yeah, that’s something he really knows about…

Yes, crap like this sells, and it explains why people like Bill O’Reilly, Rush Limbaugh, Randi Rhodes, and Michael Savage still have jobs in media. Kind of sad, really. There are thousands of people who can’t think for themselves – and rely on dolts like Mariotti to tell them what to think. Big Media capitalizes on this and runs away with it like a defensive back intercepting a pass.

And to all you Mariotti supporters out there – all twelve of you – why do you support this human waste? Is it because of his negativity? Or is it because he criticizes successful figures because they are not the 9-to-5-miserable-in-their jobs-clock-punching-ilk like you guys are? I wonder if those who think Mariotti is a “gifted writer” also watch According to Jim and went to see Meet the Spartans, Epic Movie, and Disaster Movie? Jason Friedburg and Aaron Seltzer would be proud of you.

Mariotti made a mockery of what I love to do, and that is to write. It’s an complete insult to us who have the passion to tell a story, instead of trashing someone’s reputation when it’s not warranted and doing so just to be mean. Certainly, TV critics didn’t rip into Brandon Tartikoff when he helped guide NBC to the top of the ratings charts in the mid-1980’s, so what’s the purpose of Mariotti ripping into successful individuals, even if they made one mistake? Since when he’s the voice of morality when he has none himself? Face it – Mariotti is no writer. The jerk was interested in only pissing people off, and someone was dumb enough to write him a check for it.

His relentless bashing and negativity was a turn-off for many readers of the Sun-Times, and now with him gone, the paper’s circulation actually may go up. It’s like removing cancer from the body – once it’s gone, the whole body feels better and re-energized.

Mariotti never apologized for anything he wrote – right or wrong – and it usually was on the wrong side. Here’s what I know: Mariotti is the most disgusting scumbag to ever write for a Chicago newspaper, and I’m more than happy this pathetic jackass is gone – hopefully to never return.

So, goodbye you walking piece of shit.  Don’t hit your dick on your way out. You dick.