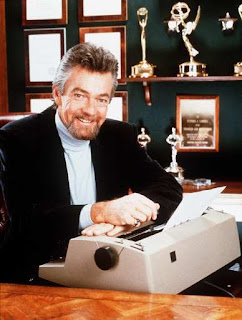 Writer, producer, and businessman Stephen J. Cannell, died yesterday at the age of 69 in his Pasadena, Calif. home from complications resulting from melanoma. The news came as a shock to a lot of people, since his illness wasn’t made public.

Cannell wrote, created, and produced many television shows, selling his first script in 1968 to Universal for It Takes A Thief. He also created The Rockford Files at Universal, and gave future Sopranos writer David Chase a job as a scribe for the show.

He formed his own production company and hit his stride in the mid-1980’s with hit series like The Greatest American Hero, The A-Team, Hardcastle and McCormick, Hunter, Riptide, The Commish, and Wiseguy. However, he was responsible for his share of duds as well – J.J. Starbuck, The Last Precinct, and The Rousters.

In 1987, he produced 21 Jump Street, Fox’s first crime drama, which was a major success with young viewers. The series made celebrities out of then-unknown young stars Johnny Depp and Holly Robinson Peete. In order to keep costs down, Cannell opened a studio facility in Vancouver, British Columbia, Canada and produced numerous shows there, including Jump Street.

When Fox canceled Jump Street in 1990, Cannell formed his own syndication company to continue the series in first-run syndication. Cannell later created other action hours in syndication including Street Justice and Renegade.

Cannell also created programs in other genres. In 1992, he created two game shows: Personals,a late-night dating game show strip for CBS; and Caesar’s Challenge, a game show originally targeted for syndication, but wound up on NBC’s daytime lineup in 1993 instead and also had a short run at WGN-TV in Chicago.

Cannell also went into the television ownership business, buying WUAB-TV in Cleveland and Fox affiliate WHNS-TV in Greensville, S.C. WHNS was sold in 1994; WUAB was sold in 1999 to Malrite, then-owner of CBS affiliate WOIO-TV (who managed WUAB for six years prior.) Both WOIO and WUAB are now owned by Montgomery, Ala. -based Raycom Media.

Cannell’s company was bought out by New World Communications in 1995, which News Corp. would acquire two years later. Cannell re-acquired some of his series’ rights and sold the DVD rights to them to Mill Creek Entertainment.

And Cannell would also pop up on camera from time-to-time. He hosted CBS’ late-night anthology series Scene of the Crime, and appeared in acting roles on Renegade and most recently, Castle.

Cannell was also vocal on numerous industry issues. He showed his concerns about the decreasing presence of the independent producer in Hollywood, thanks to the disappearance of the financial interest and syndication rules from the media landscape.

In recent years, Cannell focused mainly on writing novels, in which he has released fourteen of them.

On a personal note, let me say Stephen Cannell was one of my idols growing up and helped inspire me to be a writer. He understood character development, structure, and best of all – how to tell a great story. In addition, he also understood the basics of the media business – even owning two TV stations on the side. How many writers can lay claim to that? He really understood the business.

Even more impressive, he had dyslexia and overcame those odds to become the talented producer and writer he was known for.

His mark on Hollywood – and the media business –  will never be forgotten.