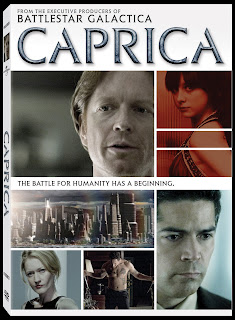 Sorry guys, you lost The Battle of Humanity in this early round because there weren’t enough humans interested.

It looks like the guys from The Big Bang Theory will have to find something else to do on Caprica night.

The spin-off prequel of Battlestar Galactica was canceled by SyFy after nearly a season on the air. But in a rather unusual move (at least for a cable network), SyFy is pulling the episodes immediately, and plan to burn off the remaining five episodes in the first quarter of 2011 (guessing it will be buried in an overnight time slot somewhere on the schedule, adjacent to those vacuum cleaner and vegetable chopper infomercials …)

Caprica had difficulty drawing more than a million viewers per epsiode and fared even worse among adults 18-49, where it often averaged a one share.

But the good news for BSG fans (maybe) is SyFy is launching another yet spin-off prequel of the franchise with Blood & Chrome, which is set ten years into the Cylon war. The new series may focus on how the Cylons were developed – which was the obvious point of Caprica.

Yours truly actually bought the two-hour pilot of Caprica on DVD over a year ago and it’s still sitting on the shelf. What does that tell you? (other than I wasted $24…)

ABC plans to continue production of the series until it reaches its thirteenth episode, even though the network plans to fill the time slot in November with specials. The remainder of the series’ eight episodes are either likely to be released on DVD, and/or burned off later in the summer.

The two axings brings the total number of series’ cancellations to five so far this season.