"Millionaire’s" revamp – Jump the question or the shark? 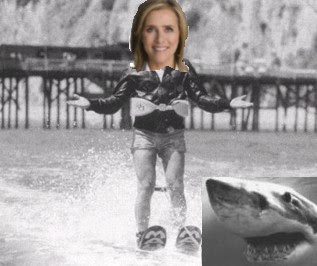 When Who Wants To Be A Millionaire returns to begin its ninth syndicated season on September 13, the show will go under a dramatic overhaul so stringent, the only thing you may recognize is host Meredith Vierra.

To stem declining ratings, the series is changing the way how it plays the game. And if you thought it was tough to win the million dollar prize before -you haven’t seen nothing yet.

For starters, there’s no more hot seat. Contestants will stand for the duration of the game as will the host, which according to the producers will allow for “more personal interaction and uninhibited emotion as the contestant accumulates winnings.”

Millionaire is now being divided into two rounds, and the amount of money contestants can win for the first ten questions is now being randomized, which means  the contestant can win $500 for one question, and the next they can win only $100 (are you following this?) And if contestants quit the game in the first round, they forfeit half of their winnings.

The second level will remain the same –  with the $100,000, $250,000, $500,000, and $1 million questions in order, with the contestants keeping all their winnings if they leave (without getting a question wrong) before they reach the million dollar question.

And with Millionaire’s overhaul, producers  know there are going to be fans who don’t like the changes. So in honor, they introduced a new lifeline called “Jump the Question”, in which contestants can skip a question they don’t know. “Jump the Question” is akin to “Jump the Shark” – as many viewers feel the show will do when the changes go into effect. In fact, with the new “Jump the Question” and “Ask the Audience” (the last lifeline left from the original network prime-time series), Millionaire will now be down to only two lifelines with all others eliminated.

The changes come comes as Disney-ABC Domestic Television (formerly Buena Vista Television) is somewhat thinning out the ranks of its programming in syndication for the upcoming season. In addition to Millionaire, Disney-ABC has only one other first-run show in production – long-running Live with Regis & Kelly. (Regis Phillibin of course, was the original host of Millionaire.) Departing of course, is At The Movies, which ended its long run on August 15 and Legend of the Seeker.

Meanwhile, Disney-ABC is debuting two new off-net weekend hours in syndication this fall with the arrival of Brothers & Sisters and Ugly Betty, both take the place of Desperate Housewives and Lost repeats; both were chronic underperformers.

And Disney-ABC continues to syndicate off-network strips America’s Funniest Home Videos, Scrubs, My Wife & Kids and According to Jim.

Locally, Millionaire currently airs on WGN-TV weekdays at 1 p.m., but there is a possibility of the show moving to 4 p.m. this fall as a news lead-in. Millionaire also airs on several ABC owned-and-operated stations, usually after the local noon newscast. Those who currently do so include WABC-TV in New York, KGO-TV in San Francisco, and WTVD in Raleigh/Durham, N.C.