Hottest Couple of the Year – Not 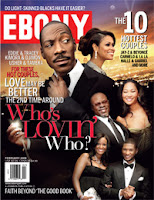 The T Dog Media Blog usually doesn’t devolve into tabloid murkiness, but this is worth reporting: Eddie Murphy’s recent marriage to producer Tracey Edmonds is over after only two weeks, according to People Magazine (call it the Viva Laughlin of marriages.)

Why I am mentioning this? Because Ebony magazine (the publication yours truly grew up reading religiously) recently named the duo as one of its “10 Hottest Couples” in its February issue that already hit newsstands last Friday. Oops!

This is the problem with magazines and these types of issues that produces these “lists” – it’s the same people every year (honestly, how many times Jay-Z and Beyonce can be named a hottest couple in a decade?), and the ones we do see a lot of people don’t give two hoops about. Sarah Jessica Parker and Jennifer Aniston are named as one of People’s 50 Most Beautiful People In The World for how many years in a row now? The shtick gets old. Celebrity lists are useless.

Ironically, Ebony didn’t exactly “list” the couples in a Billboard chart-type fashion – they were thrown all over the article, which made it quite difficult to read.

Celebrity couples can be celebrated – but keep in mind that we don’t know what goes on behind closed doors. Today’s hottest couple may be tomorrow’s broken relationship. Respectable publications can’t afford to be put in embarrassing positions, which could hurt their credibility. It is a huge risk to take.

Advice for Ebony: Let’s be careful out there.