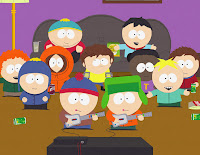 It’s been a great year for animated prime-time shows – The Simpsons were a success at the box office and continues to be so on TV in its 19th season; Family Guy continues to roll on thanks to its new found success in syndication; Adult Swim continues to be a strong draw among young males; and even shows like Drawn Together and American Dad are finding new audiences.

But what about South Park, you ask? What about it, indeed: It recently earned its highest ratings since 1998, and is the top original scripted cable series in three key male demographics – not to mention the program scored its highest adults 18-49 rating in seven years, thanks to outstanding episodes like the three-part “Imaginationland” and “Guitar Queer-O” (which drew 4 million viewers).

South Park is scheduled to return with new episodes to Comedy Central in March.