NBC at TCA: Will & Grace renewed for a second season already 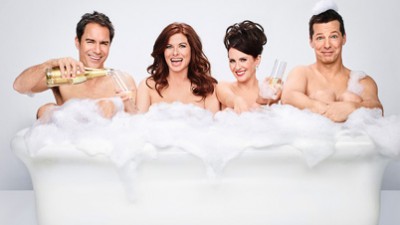 And other peacock network notes

It was NBC day at the Television Critics Association press tour and the show everyone was talking about of course was the return of Will & Grace after 11 years off the air, while another big draw as This Is Us.

Ahead of the Will & Grace presentation, NBC renewed the series for a second season, even before the revival returns on September 28. The series’ first season episode order has already been extended from ten episodes to sixteen. The sitcom originally ran on NBC from 1998 to 2006 and ran in off-network syndication from 2002 to 2008 (Warner Bros. handled syndication as NBC did not have a syndication company at the time of selling the show.) The sitcom became the first to feature two gay characters.

During the presentation, producers and cast members talked about how great it was to be back. For one, the series will not pick up where it left off – meaning the events of the 2006 finale – is not being considered canon.

“We aren’t going to be writing the show like it’s 1997,” said co-creator David Kohan, who will return along with co-creator Max Mutchnick and director James Burrows. “We will be writing the show as if these four are living in 2017. We have fantastic young talent in that writing room keeping us on our toes and keeping it fresh.”

The program – which released a viral video last November urging people to vote – will tackle political and pop culture issues – and this day and age, there is plenty of material to mine from.

The other big presentation at NBC was for hit drama This Is Us, which had a blockbuster freshman season. At the panel, some plot details were revealed: The Big Three celebrates their 37th birthday (don’t ask); Kevin is working on a film Ron Howard is producing (but not narrating) which Sylvester Stallone (appearing in a guest arc) is appearing in.

In other NBC news at TCA:

NBC Entertainment president Bob Greenblatt touched upon a number of issues during the executive session of the press tour, including a new female directors’ initiative and the scrapped the idea of moving This Is Us to Thursday after reservations from advertisers and viewers – though the interruption from Thursday Night Football in late November and December was the main reason.

As the top-rated network in the key 18-49 demo, Greenblatt felt he didn’t need to make significant changes, other than add back Will & Grace, of course.

In the upcoming Law & Order True Crime: The Melendez Murders, creator Dick Wolf said you’re going to get a version of the show different than any other. ‘This is a show that has an agenda,” Wolf said. “Your mind is going to receive information that I think will change a lot of people’s attitudes.”

Brothers Lyle and Erik Melendez killed their parents in Beverly Hills in August 1989, rkicking off a trend of similar events involving wealthy people, murders, and intrigue. The trial captured the nation’s attention as it became the first of its kind to be televised. New details surfaced about the case recently, and is being presented in this limited-run eight-part series as Edie Falco plays the brothers’ defense attorney.

The adaption is the latest in a number of fare as audiences continue to feast on real-life true crime stories – notably FX’s ratings and critical success with The People vs. O.J. Simpson last year.

Wolf said after doing 27 years of different variations of Law & Order – including several “ripped from the headlines” episodes, he said this new project is on a different level – and it will be different, that’s for sure.

Watch the trailer below:

In Steve Harvey’s presentation for his new revamped daytime talk show titled Steve, Harvey said he wanted the show to be more of a “late-night” version of a talk show during the day.

“I created a concept with (exec producer) Shane (Farley),” said Harvey. “I wanted to bring late night TV to daytime. I think that’s what’s missing. After doing daytime for five years, no one watches daytime for takeaway anymore. They need to just laugh in the middle of the day, I’ve been restricted on that in the past five years. People need to have a place to go to laugh instead of waiting until 11 p.m. at night.”

From what yours truly is able to comprehend from this, Steve is following the format from the early years of Rosie O’Donnell’s daytime show, which had a monologue, human interest stories, and field pieces – segments Harvey plan to have on his show (Martin Short and Caroline Rhea also had a similar format during their short-lived runs.)

As for that infamous “memo”, Harvey said he learned some things: “Number one, I can’t write and I should never write.”

Seeing all the junk in this era of “Peak TV”, the television industry is grateful.

Despite the move from Chicago to Los Angeles and the format and production company change, Steve remains cleared on NBC-owned stations for next season including WMAQ-TV here. Harvey’s other syndicated project (Family Feud) is also moving back to Los Angeles next season after several years in Atlanta.