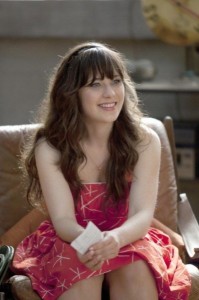 Judging by the fawning of “New Girl” Zooey Deschannel (left), you’d think every male in America would want to lay her down by the fire and make sweet love to her.

While no one spilled the remains of dead fictional sitcom characters or walked through nude in any of last night’s programming (though a lot of us wished Zooey Deschannel would), Fox’s new critically-acclaimed sitcom New Girl scored an upset ratings victory in the adults 18-49 demo with a 4.8 Nielsen rating and a 12 share, making it the highest-rated non-animated sitcom premiere on the network since The Bernie Mac Show on November 14, 2001.

Not only that, New Girl actually improved from its Glee lead-in by 20 percent in rating and 12 percent in total viewers. Many expected the opposite in the ratings department for New Girl coming out of Glee.

As for Glee, the third-season premiere cooled off considerably drawing only 9.2 million viewers, down from 13 million from last year’s second-season premiere with only a 4.0/11 in the key demo, coming in behind – get this – CBS’ NCIS, which drew a 4.3/12. Glee’s coolness is starting to wear off, thanks in part to the increased disdain for creator Ryan Murphy and the lackluster performance of the Glee 3D movie in theaters this summer.

Raising Hope averaged a respectable 3.1/8 for its second-season premiere, but dropped considerably from New Girl lead-in.

As for the rest of the fare Tuesday night, Dancing With The Stars results show drew only 14.8 million viewers and 2.9/7 in the demo. Former Chicago Bulls player Ron Artest (or Metta World Peace or The Batman Symbol or whatever he calls himself these days) was the first contestant eliminated – which means he can go back being a locked-out NBA basketball player.

Other winners included NCIS: Los Angeles, new CBS drama Unforgettable while NBC’s The Biggest Loser is living up to the name in the ratings, and the label certainly applies to CW’s 90210 and Ringer – both were down last week from their already lackluster premieres.