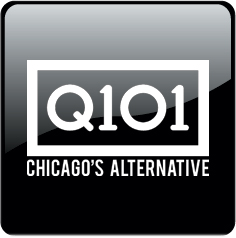 These days when a format change takes place at a radio station, it usually happens without notice and the radio personalities are usually thrown out onto the street without the chance to say goodbye.

Thankfully, that won’t be the case Thursday as WKQX-FM (Q101) prepares to shift from Alternative/Modern Rock to either all-News or News/Talk. Before handing the keys over to new owners Merlin Media, Emmis Communications is letting its on-air personalities say goodbye to the listeners they connected with over the years. And to top it all off, Q101 is airing a special final edition of Local 101 (which showcased local rock bands) Thursday night at 11pm.

At the same time Q101 goes dark, sister alternative rocker WRXP in New York City is also exiting the format and is also presumably switching to News or News/Talk.

Merlin Media is taking over operations of Q101, WLUP-FM, and WRXP through a local marketing agreement at 12:01 am on Friday. But the programming plans for Q101 and WRXP is anyone’s guess since the News/Talk format won’t be ready for a couple of weeks. Could Merlin stint with a different format-a-day stunt that was tried at WNIB between for two months in 2001 before converting into WDRV and The Drive?

Meanwhile, many listeners are a praising Q101 for being very creative with their playlists in the station’s final days. On Tuesday, former Q101 jock James VanOsdol tweeted: “Q101 sounds great today. Note to radio programmers: don’t wait for a format change to let your air talent be real and play music they like.”


Did You Know? The last time their was a simultaneous format flip in two different large markets was the June 3, 2005 conversion of Infinity’s (now CBS Radio’s) WJMK-FM in Chicago and WCBS-FM in New York from Oldies to JACK-FM. Both stations has since dropped the JACK branding and image and became Classic Hits stations.