Is the Alternative Rock format on the ropes? 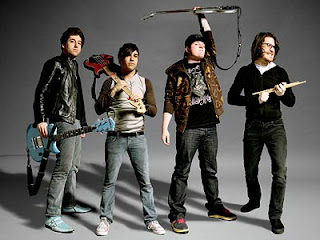 More talk, less music – as in none at all. Say goodbye to Q101, who Winnetka-based Fall Out Boy credits for helping launch its career.

With Randy Michaels about to take over Emmis’ WKQX-FM (Q101) in Chicago and  WRXP-FM in New York City and the all-but certain likelihood of shifting both stations from Alternative Rock to either all-news or news-talk, what does this mean for the format?

The Alternative format, (also known as Modern Rock) blends Punk Rock, New Wave, and Grunge music and was adopted by many radio stations in the late 1980’s. In 1988, Billboard created a new Modern Rock Tracks chart (now named Alternative Songs Chart) to monitor stations playing such fare. But it was the explosion of Grunge in the early 1990’s that put the format on the map, led by Nirvana, Pearl Jam, and Sonic Youth. Other bands becoming mainstays of the format were Red Hot Chili Peppers, Foo Fighters, Green Day, and Chicago’s own Smashing Pumpkins. Even some hip-hop artists made it onto the format, including The Beastie Boys, Eminem, and Kid Rock, and some Alternative Rock songs had elements of rap in them, such as P.O.D.’s Youth of the Nation.

According to Mediabase and All Access, the number of monitored stations in the Alternative/Modern Rock format stands at 70 as of this writing, with 74 Active Rock stations monitored and 34 Mainstream Rock reporting. But these numbers are easily dwarfed by other formats with Country at a whopping 230 stations, followed by CHR/Top 40 (180), Adult Contemporary (147), Hot AC (125), Rhythmic Top 40 (98), Urban AC (86), and Urban (76). Obviously, the splintering of the rock genre into three formats (four if you include Triple A) is a problem, with several acts appearing simultaneously on two charts, or even all three.

Also contributing to rock’s struggles is the proliferation of FM Talk stations, the direction Q101 and WRXP are obviously headed. However, the FM expansion is not just unique to replacing rock music formats – “spoken word” formats replaced a CHR in Pittsburgh, and News/Talk replaced six Adult Hits stations, including Nine FM in Chicago and “Movin'” (a Rhythmic AC format) in St. Louis.

And another problem is the lack of advertiser support as the Alternative format as female listeners (who many advertisers pay a premium to reach) fled for the exits over the years to Hot AC and Top 40 stations, thus making the stations less attractive for media buyers. Much like the Smooth Jazz format (which attracted too many older listeners for advertisers’ tastes), rock formats tend to skew too young and male – not the female 25-54 audience advertisers target.

As for Q101, the attitude amongst its listeners is “this is what passes for an Alternative format.” Many complain about the music having too hard of an edge, with angry and depressing lyrics (which were popular 20 years ago, but how many times you can hear the same Nirvana-like song over and over again?) Others say several artists – Guns N’ Roses and Nickelback in particular – do not fit the format. Since the Mancow Mueller era ended in 2006 with a nasty divorce, the station’s moves (launching the lame Morning Fix, being “On Shuffle”, etc.) alienated what was left of the audience (and even Q101 adding Mancow back in ’98 was the beginning of the end from an ad revenue standpoint, as he was basically a female repellent.)

But while the Alternative format is down, it’s certainly not out – there are some success stories. CBS-owned KROQ-FM in Los Angeles still does well, attracting a cume of two million listeners a month, even though it came in an unimpressive twelfth in the latest PPM survey. Clear Channel’s KTBZ-FM regularly ranks in the top ten in Houston. And Simmons’ Media’s KXRK-FM in Salt Lake City does phenomenally well, placing third overall in the latest ratings book.

But with the coming departure of two of the largest markets in the nation, the Alternative/Modern Rock format will take a hit. The future of the format will likely live on where niche formats are thriving – satellite radio and online. But in the money-grubbing world of commercial radio, it’s a fading format. The piece Alternative takes out of the revenue pie is only going to get smaller and smaller.