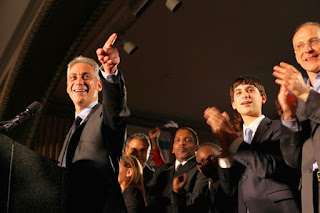 Chicago elected new mayor Rahm Emmanuel in a historic election – the first in 22 years without the name Daley on the ballot. But in the end, the ratings for Chicago’s broadcast TV stations looked like what you normally find on a Tuesday night as low voter turnout morphed into a huge viewer tuneout.

At 10 p.m., the numbers were pretty much reflected what you would find on a normal weeknight: WLS lead in among adults 25-54 and in households with a 4.5/13 and a 9.6 rating, respectively, with WMAQ second and WBBM third.

While Rahm Emmanuel’s victory wasn’t really in doubt, the early projection from CNN and other sources – 45 minutes after the polls closed (basically before Sue Sylvester can clobber anyone on Glee with her megaphone) caught local news operations by surprise, and likely suppressed ratings for election coverage. CLTV and WMAQ’s Non-Stop Chicago channel provided live coverage throughout the evening.

In all, Chicago’s five major news stations combined for a 23.8/37 at 9 when the mayor-elect made his acceptance speech – down considerably from the 43.3 rating for Richard M. Daley’s victory on April 4, 1989 – at a time when much of Chicago still wasn’t wired for cable TV and your video alternatives were either VHS or Beta, and your computer (if you could afford one) was either was an IBM PC or an Macintosh II.

The numbers for WBBM and WFLD are clearly disappointing. Despite Fox’s (at least when American Idol is on) successes in prime-time, it hasn’t translated to additional viewers for WFLD, and it’s also a problem of WBBM, though to a lesser extent. There is no excuse for a station’s late newscast to lose a significant portion of viewers from a prime-time lead-in – especially since local news is “appointment TV” viewing for many.

Ratings information in this article provided by Nielsen Media Research via Chicagoland Radio and Media, Chicago Sun-Times, and Robert Feder from Time Out Chicago. Photo courtesy of Chicago Tribune.