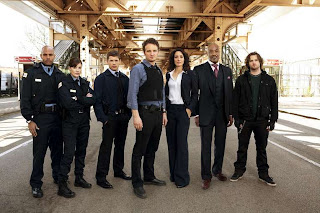 The debut of Fox’s The Chicago Code Monday Night turned in a surprisingly disappointing ratings performance, given all the hype and promotion of the new shot-in-Chicago crime drama received during Super Bowl XLV.

The show features Chicago native Jennifer Beals (who starred in the hit theatrical Flashdance) as a tough police superintendent who battles corruption in the Windy City, including a crooked alderman. Code is from Rockford native Shawn Ryan, who created and produced FX’s gritty crime drama The Shield.

Despite drawing a total of 9.433 million viewers in its Monday night 8 p.m. (CT) time slot, Code drew only a 2.4/6 in adults 18-49. The program finished third behind CBS’ Two and a Half Men and ABC’s The Bachelor, which usually dominates in key female demos (Code did beat NBC’s The Cape, but that is akin to the Indiana Pacers beating the Cleveland Cavaliers.)

While Code was greeted with critical acclaim (a 75 score on Metacritic), public reaction from Chicagoans was mixed – Code was bashed by a few local columnists and websites and by many commenters, with the most common complaint as the series being unrealistic. Others complained about the lack of authenticity in the series. One blog (Second City Cop) did blast the series as yours truly predicted– but it was a short post about Code being uninteresting and let readers of the site do the bashing instead (which to no surprise, was about 4-to-1 in the negative category.) On Twitter however, reviews were much more positive.

As for yours truly’s assessment of The Chicago Code, the series did feature a lot of action and great scenery around the city. Conflict was clearly present – with Alderman Ronin Givens being even more corrupt than a real politician (can that even be possible?) and Beals taking on a lot of police brass (with one of them shouting to her, “You think you can change how things are done in Chicago?!?!”) On the other hand, the dialogue was hokey and awkward in some parts. In the first act for example, a detective scolded a colleague about the use of harsh language around women and children. And what offensive language did the colleague use? “Screw it” and “ass”. Wow, what threatening words. And the subplots were nothing to write home about either (Sex for lunch? Seems like a plot ripped off from Skins.)

On Twitter Monday, yours truly gave this series a B+ with some needed room for improvement. But in an era where prime-time schedules are glutted with these type of shows, The Chicago Code unfortunately does not stand out. And with many Chicagoans unimpressed with the show, it will be an even bigger uphill battle for this already beleaguered crime drama.