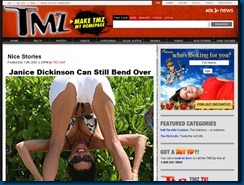 If you visited either Broadcasting & Cable and/or TV News Check’s websites over the last two days (unless you have NoScript – and what a blessing that is), then you’ve probably seen those banner ads from Warner Bros. which screamed the news of TMZ’s renewal through 2014.

Well, here’s some more information on the deal (basically, not much more – the banner ad pretty much told it all) – the anti-celebrity syndicated magazine has been renewed by stations covering 75 percent of the country, including the entire Fox owned-and-operated station group. In Chicago. Fox-owned WFLD airs TMZ weekdays at 5:30 p.m. and again at 11 p.m.

That means you’ll see Harvey Levin and his college intern-like staff continue to talk about what celebrity they can stalk at LAX or some celebrity whose been out of the spotlight for ten years and ask them some, um “interesting” questions.  The show also regularly parodies celebrities when they are in the news for better or for worse – and it usually worse.

The show is based on the wildly popular TMZ website, which has been instrumental in breaking news whenever celebrities (or semi-celebs) act badly.

So as long there is a Paris Hilton, Tiger Woods, or Lindsay Lohan behaving badly in the Thirty-Mile-Zone of Hollywood – and beyond, you can always count on Harvey Levin to give you the humorous scoop.