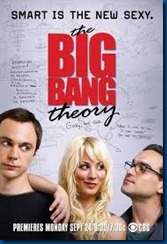 Bagging a renewal: Sheldon and the gang are around for three more years.

The Grab Bag is actually living up to its name today by grabbing some baggage and some renewals:

– WCIU here in Chicago and nine stations owned by Sinclair Broadcasting quietly began testing an off-cable dating game show this week called Baggage, with a format that combines classics The Dating Game and The Newlywed Game. Hosted by Jerry Springer and syndicated by NBC Universal (which also happens to syndicate his talk show), the show is currently running on GSN and has been picked up for a second season. WCIU and other stations are currently testing the series for ten weeks and if successful, may be sold into syndication either for a fall 2011 or fall 2012 start. Baggage is seen on WCIU at noon weekdays.

-CBS and Warner Bros. announced Wednesday a three-season renewal of hit sitcom The Big Bang Theory, which takes  the series through 2014. This comes as Big Bang has become a success in its new Thursday 7 p.m. (CT) time period after three successful seasons on Mondays. The Big Bang Theory enters off-network syndication this fall as a weeknight strip.

– Also on the renewal front: The Wendy Williams Show has been picked up for a third season. Debmar-Mercury made the announcement today as renewals have passed the 70 percent of the United States, with stations owned by Fox, CBS, NBC (specifically KNTV in San Francisco), Raycom, Cox, New Vision, and more. Williams is sold on a cash-barter basis with four minutes set aside for national ad sales by Twentieth Television. Locally, Fox-owned WFLD carries Wendy Williams each weekday at 10 a.m. and again at 11:30 p.m.

– In the surprise of the week, The Game pulled an upset and won big  in the ratings Tuesday night. The former CW sitcom drew 7.7 million viewers in its 9 p.m. time slot – more than many network programs did the same evening. One day earlier, ESPN set a cable ratings record 27.3 million viewers for the BCS College Football Championship between Auburn and Oregon, in which Auburn won 22-19 in a late-game field goal. Auburn not only won the BCS Championship, but each member of the team won a lifetime supply of Tostitos (LOL.)  It’s not a problem for Tostitos manufacturer Frito-Lay – as long as Brent Musburger foots the bill.