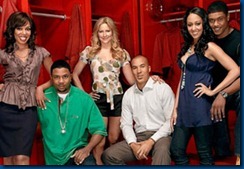 It’s “Game” back on for the one-time CW sitcom.

The Television Critics Association tour continued in Pasadena on Thursday with Oprah Winfrey and her new OWN network obviously the biggest attraction (more in the next post.) But there was other news from this day as well, with BET, Turner, and Discovery making presentations:

The biggest projects BET has on tap  is their first foray into original scripted programming. First up is the revival of former CW sitcom The Game, which debuts Tuesday night at 9 p.m. (CT). The Game joins a select few programs that have been revived on cable or in first-run syndication after their network runs ended. The list includes Airwolf, The Days and Nights of Molly Dodd, Charles in Charge, and Too Close For Comfort, among others.

The cast was at the press tour Thursday reported Eurweb, and talked about how they had to deal with resuming the show after being off the air for two years, and the move of production from Los Angeles to Atlanta.  Series creator and executive producer Mara Brock Akli  (who also created Girlfriends, from where the series spun-off from) said when she got everyone finally under contract, the writers got the go-ahead to produce new scripts. Her husband, co-executive producer Sam Akli pointed out the writers –all who had stories to tell -were eager to get to work.

Much like when Sony ditched its syndicated courtroom shows from its portfolio to make room for product from Harpo Studios, CW canceled The Game and other sitcom fare in 2009 to focus exclusively on female-skewing one-hour dramas – this despite the fact The Game had been improving in the ratings, even in its tough Friday night time slot. BET acquired repeats of the previous three seasons of the show and became a huge hit for the network. When The Game ran on CW, the series was often the most-watched series on broadcast television among African-Americans.

Launching after The Game on Tuesday is an original sitcom titled Let’s Stay Together, a show which according to its ads, is “an original comedy about love and happiness”. Well, good luck with that.

Larry King’s successor was also present at the tour, with Simon Cowell Piers Morgan announcing he will have Oprah Winfrey on his first show when it debuts January 17 on CNN. Pretty impressive get for a nobody, except for fans of Fox’s NBC’s American Idol America’s Got No Talent.

Moving on to a real star, Ray Romano was at the tour hawking TNT’s critically acclaimed drama Men Of A Certain Age, and when asked about how his wife felt about his kissing scenes, Romano replied: “Every time my wife sees me in a kissing scene, she says, ‘This is … We have enough money.’ ”

Also present at Turner’s presentation was new legal drama Franklin & Bash with Mark-Paul Gosselar (who appeared on 2008 dud Raising The Bar – guessing this will be his second TNT flop in a row) and Adult Swim’s eleven-minute sitcom Children’s Hospital.

As stated before, the OWN network presentation will be covered in another post. As for the rest of Discovery Networks’ programming at the tour:

– If you were wondering, yes, there is a Science Channel. And they have Ridley Scott. The critically acclaimed film director is producing a new eight-part series called Prophets of Science Fiction, which takes viewers on a journey with Ridley to explore the great minds of science fiction, from Issac Newton to George Lucas (Star Wars) and their unique way of storytelling. The series debuts later this year.

– Discovery is launching a new Chicago version of Cash Cab, with Second City alum Beth Melewski hosting the festivities. So if you are here this summer and board a cab in the Loop – be warned – you might actually win lots of money instead of forking it over.

– Mike Tyson showed up on stage to hawk his new program on Animal Planet  titled Taking on Tyson, with the former championship boxer fooling around with pigeons. I give the pigeons 5-to-1 odds on knocking out Tyson – or at least dropping a “present” on his head…