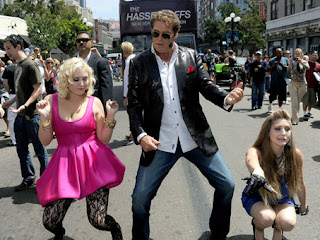 Hoffin’ around in TV Hell.

Notes and notables from the past week:

– One of Chicago’s best media columnists has a new home: Robert Feder has joined Time Out Chicago as the magazine’s media blogger. Beginning next month, Feder will have a blog (just like the one he had at WBEZ under the Vocalo name) on the Time Out website. The longtime Sun-Times columnist was praised recently for his work on Vocalo uncovering the shenanigans involving Randy Michaels and the Tribune Co. in the past year.

– Also on the syndicated talk show beat, Sony’s The Nate Berkus Show received a huge boost with upgrades from NBC affiliates in Detroit and Houston, with repeats of The Real Housewives the odd man – or in this case, the odd gal out  beginning Jan. 3. In the Motor City, Berkus is being upgraded to 2 p.m. on WDIV from its 3 a.m. time slot. In Houston, Berkus is shifting to the same time slot on KPRC, upgraded from a 8am time slot on its This TV digital subchannel. (the info provided in the link said 12 noon, but Housewives airs at 2 in Houston, and this is likely where Berkus will end up.)  Both WDIV and KPRC are owned by Post-Newsweek. The downgrades could likely spell the end of Housewives’ as a syndicated strip as the program – a hit on Bravo in both first-run and reruns – is averaging only a 0.5 household rating so far this season.

– And we have what could be the shortest-lived program in cable television history. A&E canceled The Hasslehoffs after just two back-to-back half-hour episodes. The reality series featured David Hasslehoff’s two daughters trying to pursue careers in entertainment (perhaps pushing brooms at NBC Universal’s headquarters?)  The series’ premiere episodes on Dec. 5 averaged only 718K and 505K viewers, respectively. And you all know what this means, don’t you? That’s right… a trip here.