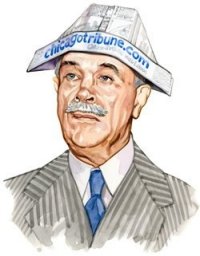 Your symbol of the Chicago Tribune. We do newspapers right!  Want fries with that?

The only similarities between John Kass and yours truly is we are native South Siders and White Sox fans.

That’s where it stops, believe me.

Once again, a Big Media cronie proves how much he or she is out of touch with the realities of today’s media business.

On Wednesday, the longtime columnist of the Chicago Tribune defended the paper he works for and rips into those who constantly been criticizing the paper, including the New York Times, bloggers, and other longtime critics, while his idiot readers praise him in the comments section by trying to make this a partisan political issue (those late-night poker parties? Yeah, it’s Obama’s fault. And in true Jay Mariotti fashion, he pulled down the comments section because it provided another point of **ahem** view different from his… what a dick move.)

While yours truly gives Kass props on defending journalists hard work ethics at the struggling paper, he completely misses the point when he talks about the corporate culture at the Tribune. His article basically claims what goes on at the Tribune Tower is none of our business. But when he talks about how the paper has a strong investigative unit and how politicians are evil and keep their journalists from accessing documents, it makes me want to hurl given the shenanigans going on at Tribune Tower.

And of course,  he doesn’t mention how the purchase of the Tribune by Sam Zell was found to be fraudulent by unsecured creditors, heaping on $8 billion of debt, while only mentioning the unethical frat antics at Tribune Tower in passing. He also conveniently didn’t mention the thousands of employees who were laid off since Zell took over the paper.

What a hypocrite. The article comes off as smug, self-serving, and elitist, referring to bloggers as people in “their mommy’s basements.”

Well, it didn’t take long for the blogosphere to strike back. One blogger for ChicagoNow (which is a network of blogs owned by – you guessed it, the Tribune!) asks “Dear John Kass… Where is the Love?” In it, Julie DiCaro defends bloggers, pointing out not all of them blog from the place you go when you hear tornado sirens, and in fact, writes from an office mind you. She also asks when was the last time Kass actually broke a story (1976, perhaps?)

Meanwhile, Kass talks about great the paper is, mentioning how the Tribune’s reporters are out late at night in dangerous neighborhoods looking for witnesses after murders are committed. Since Tribune loves to pay small wages while their corrupted execs earn millions, you wonder if those reporters are better off working in safer conditions for the same pay at Wal-Mart.

And while it kinds of pains yours truly to say this, but the New York Times is miles ahead of what the Tribune offers in print and online. While the Times offers award-winning journalism, the Tribune website has an idiotic Sirens and Blotter Blog, which seems to be written from the Chicago Tribune’s basement. Even worse, their Breaking Sports Blog is a joke –  while checking to see who won the Blackhawks-Canucks game around 11 p.m Wednesday night, the latest item regarding the game was posted around 9 p.m. when the game was still in the second period. But at least it kept us updated on the status of some moron running out onto a field during a Rangers-Yankees playoff game. Breaking sports news, indeed.

And what has the Tribune done to the legacy of publisher Colonel Robert McCormick? The paper turned him into a cartoon character with a silly hat, not unlike what KFC did with Colonel Sanders in the late ’90’s. Good grief, what’s next? Colonel Tribune opening up a chain of fast-food restaurants? Next time you visit Colonel Tribune’s twitter page, make sure you click the link to get a coupon for the eight-bucket special with free biscuits and mashed potatoes.

As for Kass, yours truly has never really read his column, and won’t begin now. Kass is just another out-of-touch dinosaur working in a business that desperately needs new leadership. Kass needs to stick to politics or ripping on Daley or whatever so his columns can remain uninteresting.

And by the way… when you leave the letter K off the word Kass, what word do you have?… yep, that’s exactly what he is.