Lee Abrams: The rise and fall of 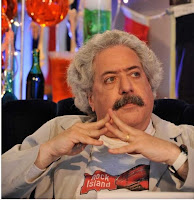 The resignation of Tribune executive Lee Abrams on Friday was pretty much expected, and came as no surprise.

Abrams sent a company-wide e-mail on Monday featuring Not Safe for Work videos and angering employees company-wide, and was suspended Wednesday for doing so. Some of the videos featured stuff you would normally find on a Girls Gone Wild DVD.  And all of this came as a New York Times article ten days ago exposed the frat-boy antics that was going on at the Tribune Tower, as did Vocalo’s Robert Feder beforehand.

Forget NBC: The Tribune Co. has surpassed the peacock network as the biggest joke in the media industry. Not even Jeff Zucker and Ben Silverman have accomplished what Tribune’s Three Stooges have done in a short time: Owner Sam Zell, CEO Randy “Court Jester” Michaels, and Chief “Innovation” Officer Lee Abrams have managed to alienate viewers, listeners, advertisers, and their own employees, not to mention slide the company into bankruptcy. Anything and everything they touched turned to rust. The only thing the stooges didn’t try to do was revive Supertrain, or hire Pink Lady and Jeff to anchor WGN-TV’s morning newscast.

Abrams was the “Chief Innovation Officer” of Tribune, or whatever that means. What is a Chief Innovation Officer anyway? Is what Lee Abrams did at Tribune actually work? To moi, it’s just another fancy name for a job title with little or no substance behind it – much like the “sandwich artists” at Subway, and they’re better at their jobs than Abrams was at his.

Interestingly enough, a commenter on the Chicago Tribune’s Breaking Business Blog said he/she applied for the advertised position. But we all know no qualified candidate had a chance in heck of securing the position, since The Court Jester wasn’t going to fill it anyway. As it turns out, he only created the position just to give ol’ buddy Abrams a job – and he got the job because Michaels knew him from his days at Jacor, a radio company who merged with Clear Channel about a decade ago.

And you thought Chicago government was corrupt in its hiring practices.

So how can Abrams, a person with experience in radio but none in the newspaper or television industries, succeed in this role?

Well, he didn’t. Look at the evidence: Tribune’s WPIX in New York demoted two popular 10 p.m. anchors and hired Jodi Applegate to take over, resulting in a lot of angry viewers; Tribune lost the syndication bidding rights to hot off-network series The Big Bang Theory in markets where it competes against one or two Fox-owned stations (except in Philadelphia, where Tribune’s WPHL won the rights over an uninterested Fox O&O); and planned to introduce a new “anchorless” TMZ-like news program at KIAH in Houston titled NewsFix, whose concept is basically described by some as a mess (For the record, KIAH’s 9 p.m. newscast has no viewers – literally.)

How that work out for Abrams? Not exactly innovative, isn’t it? It seems Randy Michaels hired a Chief Idiot Officer instead of a Chief Innovation Officer.

And to think this person was the best it what he was thirty years ago. He hwas a successful AOR radio programmer and also had similar success at the former XM Radio. But he was unable to translate that same success to WGN Radio, the four Tribune-owned newspapers or its 26 television stations. Yes, my friends,  television and newspapers and WGN-AM are far different animals than an AOR formatted radio station. Different mediums, different time. The business needs fresh minds to stay afloat, not some 60-year old has-been whose idea of innovation is sending racy e-mails of women kissing each other. The idea may play well with the Jersey Shore fanatics (trying to “hip” to the young generation, basically), but not those who want to maintain a professional environment.

And that’s what it is all about. We need real innovators like Brandon Tartikoff, Stephen J. Cannell, Barry Diller, and William Paley in this business and less of the phonies like Abrams, Michaels, Zell, Zucker, and Silverman, who are each about as innovative as the Bears’ Offensive Coordinator. We need more creative minds –  not jerks who love to piss audiences off for the heck of it and telling them to go somewhere else if they don’t like it. That’s no way to run a media organization, or any organization for that matter.

Abrams’ departure is likely the first in what is likely to be many from the Tribune Tower. When the bankruptcy judge gets through with them, the remaining two stooges (Zell and Michaels) will likely be gone. During their time at the Tribune, the company’s newspapers circulation have continued to decline; hundreds of people were laid-off; WGN Radio’s numbers are falling in key demos; Tribune’s CW affiliates are getting squashed in primetime with programming targeted to female viewers who aren’t watching; and of course, the Chapter 11 bankruptcy.

Curly is already gone. Larry and Moe are next.