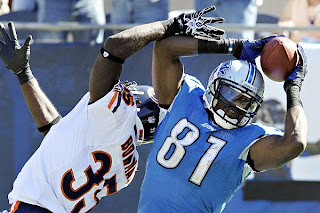 But ratings down 25% from year ago season opener

The Chicago Bears may have lucked themselves into a victory on Sunday, but at least did the job in the ratings department.

According to Crain’s Chicago Business, the Bears season opener at Soldier Field on Sunday drew a 26.1 Nielsen household rating for Fox’s WFLD-TV, with the game peaking at 31 toward the end of the game when the Detroit Lions’ Calvin Johnson scored what looked like a touchdown late in the 4th quarter.

However, the play was overturned on replay, giving the Bears the victory.

Despite the strong number – which easily makes the Bears the number one program in Chicago this week – the number is down 25 percent from the Sept. 13, 2009 season opener against the Green Bay Packers. Keep in mind, however that game aired in higher-level HUT prime-time (not to mention a Packers-Bears contests typically draw the highest regular-season football ratings of the year.)

Still, the 26.1 rating is a bit disappointing, given Chicago fans are clearly not sold on the Bears this season, with unpopular head coach Lovie Smith still leading the team, an 0-4 pre-season, and the quality of Sunday game – in which both teams combined for seven turnovers – was quite XFLish.If  the two NBC games this past week were akin to NCIS, then Bears-Lions would be akin to Heroes. Is it to late for Sylar join the Bears’ coaching staff?

Across the country though, it’s a different story – the season openers has brought strong ratings for the NFL’s network partners and for local affiliates.

Thursday’s night NFL opener between the Minnesota Vikings and the Super Bowl Champion New Orleans Saints on NBC drew the most viewers for a regular-season NFL game (27.5 million) in thirteen years. Sunday night’s game between the Dallas Cowboys and Washington Redskins drew 25.3 million viewers, easily defeating the Video Music Awards on MTV, which drew 11.4 million viewers, which is the highest rating for a VMA show in eight years.

Monday ESPN doubleheader on Monday also drew eyeballs with the Baltimore Ravens-New York Jets game drawing an 10.5 household rating while the San Diego Chargers-Kansas City Chiefs tilt in the nightcap drew a 9.1 (and yes, the game had a 9:15 start in Kansas City – almost unheard of for a sporting event in the Central Time Zone.)

For the local stations carrying the games, the rewards were just as sweet. San Diego’s CBS affiliate (KFMB) drew a 20.1 household rating while Kansas City ABC affiliate KMBC drew 25.6, despite the late start of the game.

CBS-owned WJZ-TV dominated prime-time ratings on Monday night in Baltimore with ESPN’s simulcast of the game, drawing a 27 rating.

In New York however, Fox’s WWOR-TV feed of the ESPN telecast could only muster up a 5 rating – even being outdrawn in the Big Apple by ESPN itself (9.4). WWOR is usually the weakest-rated commercial station – English or Spanish-language – in the New York Metropolitan area.