Blackhawks a winner – on the ice and on the tube 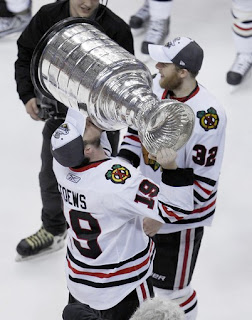 For the first time in 49 years, the Chicago Blackhawks hoisted Lord Stanley’s Cup.

And viewers fled into the entrances to see the history making event.

Game 6 of the Stanley Cup Finals between the Blackhawks and the Philadelphia Flyers drew a local household rating of 32.8 and a share of 50, from 7 p.m. to 10:15 p.m. Wednesday night. The 10-10:15 p.m window, which saw Patrick Kane clinch the Cup-winning goal, peaked at an outstanding 46.0/66 household rating and share. Aside from the Olympics, the game is the highest-rated hockey telecast in the history of the Chicago market with records dating back to 1976, when Chicago started receiving metered market “overnight” reports.

Nationally, the Blackhawks-Flyers matchup drew a 5.8 overnight rating, its best in 36 years and drew a 3.2 adults 18-49 rating, topping all competing programming for the night. The game also drew 8.3 total million viewers, the largest for a Stanley Cup Final since 1974’s Flyers-Boston Bruins matchup. Game 6 also drew more viewers than last year’s Game 7 matchup between Pittsburgh and Detroit, with a 4 percent advantage.

Among individual overnight markets, Chicago rated the highest of course, followed by Philadelphia. But the game drew strong ratings in one place where you least expected it: Fort Myers, Fla., where NBC affiliate WBBH-TV drew a 6.1/10.

Apparently, the Blackhawks quest to end one of the longest championship droughts in sports drew lots of viewers, much like what happened in 1994 when the New York Rangers ended their 54-year drought when they beat the Vancouver Canucks to win the Cup.

The four NBC Stanley Cup games this year averaged 6.1 million viewers – the most in the thirteen years the Stanley Cup Finals have aired on broadcast network television (Fox had rights from 1995-99, then ABC from 2000-04, and NBC from 2006 on. The 2004-05 lockout prevented a Stanley Cup Final from taking place.)

So, what was media consumption like when the Blackhawks last won the Cup on April 16, 1961? Well…

– The top-rated freshman series was CBS’ The Andy Griffith Show, which finished fourth for the season.

– If you thought the 1960-61 season was overrun with Westerns, you’re right: of the ten highest-rated shows on televison that season, four were Westerns, including the top three in respective order: CBS’ Gunsmoke, followed by NBC’s Wagon Train and  CBS’ Have Gun, Will Travel. (CBS’ Rawhide was sixth.) Rounding out the top five were Griffith, and ABC’s The Real McCoys.

– Walt Disney Presents, a show which was instrumental in getting ABC off the ground, jumped to NBC in 1961 with the lure of producing and airing the series in color and changing the title of the series to what else? Walt Disney’s Wonderful World of Color. NBC ditched the show in 1981 after 20 seasons because of declining ratings and an increasing reliance on reruns. (35 years later, Disney would wind up buying ABC.)

– Other popular television series at the time included Dennis The Menace, The Untouchables, Naked City, Maverick, Lassie, and The Ed Sullivan Show.

– WLS-AM entered its second year as a Top 40 radio station. With personalities like Gene Taylor and Dick Biondi, the station quickly ascended to the top of the ratings.

– The number one song on the Billboard Hot 100 the day the Hawks won the Cup was “Blue Moon” by the The Marcels, which spent three weeks at the top spot.

– Just weeks after the Blackhawks won the Stanley Cup, FCC Chairman Newton Minow dismissed television as a “vast wasteland” in a speech at the National Association of Broadcasters convention. Don’t ask him what he thinks about television today.