Another "Bachelor" break up (wow, what a surprise) 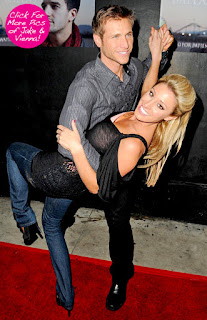 Two idiots. One’s a BP exec, the other runs the Baltimore Orioles.

Another Bachelor couple is kaput: Jake Pavelka and Vienna Girardi split up after becoming engaged on the inane ABC show last spring. Pavelka ended the relationship with Girardi because he believed he was cheating on her – a charge she vehemently denied – and she claims she dumped him. Among the other accusations: Girardi said she and Pavelka weren’t intimate in months;  Pavelka claims they had sex; Pavelka claims she was jealous because he was on Dancing With The Stars (are you bored yet?), she slept until 10:30 a.m. every day and being a freeloader, and so on, and so on.

Since the two broke up, ABC quickly took back the engagement ring before Girardi can pawn it. With this breakup, its 0-for-14 in the marriage department for The Bachelor.

While the two will go on The Bachelorette July 5 to face-off with each other, why should they go there? Those two idiots can come right here to Chicago and join Randy “Court Jester” Michaels’ circus on Bradley Place – otherwise known as Willie, the new just-sued talk show hosted by Cincinnati conservative radio talk show host Bill Cunningham, which is airing on WGN-TV and other stations this summer as a four-day test. In fact, if they decide to go and air out their differences in front of Cunningham, here’s “Slick Willie’s” own personal welcome for Jake and Vienna: