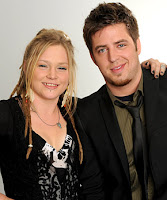 It was a Midwestern feel at the American Idol finale, with one finalist from northern Illinois and the other from north central Ohio and both auditioning in Chicago.

But in the end, it was Mount Prospect native and former paint store salesman Lee DeWyze who took home the prize and the sole title of American Idol 2010.

His victory over Toledo native Crystal Bowersox sent a huge crowd gathered in the northwest suburb into a frenzy, in a celebration usually seen for a sports championship (in fact, a little too frantic – one person in the frenzied crowd tried to grab Darlene Hill’s microphone during a live shot during WFLD’s newscast Wednesday night.)

DeWyze’s victory also ends a jinx of sorts over local Idol contestants and how Idol is perceived locally. In 2004, Chicago native Jennifer Hudson was a favorite to win, but failed to make the top six (she was a noted no-show at last night’s Idol’s finale.) Many theories ranged on why Hudson was eliminated, from bad weather knocking out phone service in the Chicago area the night fans were to vote for their favorites to race (Hudson and two other African-American contestants landed in the bottom three the night she was eliminated.)

Since then, ratings for Idol locally have lagged behind those of the national average, with last year’s Idol finale ranking 51st out of 56 metered markets in household ratings.

But with DeWyze in the latter stages in the competition, ratings have inched upward locally. But on a national level, ratings have declined significantly.

Last night’s Idol finale was the lowest rated in its history, drawing only 24 million viewers and a 8.2 rating in adults 18-49. While’s those numbers are very good, Idol had a 18 percent drop in the key 18-49 demo from last year’s finale.

The two other big finale events of the last few days: ABC’s Lost (13.5 million) and Dancing With The Stars (18 million) were also rating disappointments, with Dancing drawing a record-low 18-49 rating, dropping 27 percent from last spring’s finale.

As for the show itself, the two-hour finale featured tributes to Simon Cowell, who has left the show after nine seasons to focus on the launch of his new X-Factor show here in the United States next year. The most anti-climatic feature throughout the show was when one of the Idols would take the stage to sing a classic song – and right on cue there’s the guy who did the original comes on stage to take over. Utterly predictable, since Idol’s been doing this on their finale telecast for the last few years now.

This has not been a good year for Idol – many feel the departure of Paula Abdul and the addition of Ellen DeGeneres hurt the show creatively and depress the ratings (in fact, Idol was beaten by Dancing in total viewers for a few weeks.) Simon Cowell’s departure will no doubt accelerate Idol’s decline.

But for Lee DeWyze, his rise is just only beginning.