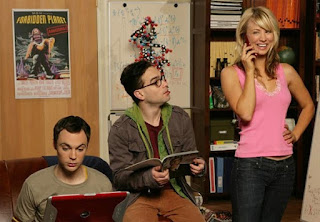 The cable deal has TBS paying a record-breaking $1.5 million per episode (for a cable network) for the rights to air the show in primetime four or five nights a week.

Big Bang is expected to serve as a lead-in to Conan O’Brien’s new talk show on TBS, which launches this fall.

Turner was expected to land Big Bang, though other cable nets, including FX and Viacom’s MTV and Comedy Central were also in the running. In fact, FX (which has the cable rights to Warner’s other superstar comedy, Two and a Half Men) was deep in the running for Big Bang up until the last minute.

With an eye on boosting its My Network TV stations, Fox bought Big Bang for its nine duopoly markets and WUTB in Baltimore, beating out Tribune Broadcasting. The interesting quirk in this deal though, is the ten-market Fox deal leaves out large markets where Fox also owns stations, including Philadelphia, Boston, and Detroit.

The sale means Big Bang will be shown locally over WFLD and/or WPWR twice a day. Fox paid close to $500,000 per week for the series in the ten markets with the show being stripped in key prime access and late fringe time periods. Warner will retain 90 seconds of commercial time to sell to advertisers on a national basis.

For Fox, Big Bang is added to a comedy lineup which includes The Simpsons, The Office, My Name Is Earl, and How I Met Your Mother, which debuts on the station group and in syndication this fall.

As for Tribune, the sale of Big Bang to Fox is a huge blow to Randy Michaels & Co., who may have demanded too much from Warner in order to land the show. Tribune actually underbid and wanted exclusivity for the first season and also wanted Big Bang to air on WGN America. Warner balked at the offers, and made the TBS and Fox deals.

Tribune currently airs Big Bang’s companion sitcom (Two and a Half Men) and Family Guy, which was recently re-upped for a second cycle.

Currently, Big Bang is one of television’s top-rated sitcoms, finishing first among adults 18-49 and 25-54 The sitcom often outperforms its Two And A Half Men in CBS’ Monday night sitcom lineup. Big Bang’s continued strong performance helped drive up the price for the show in syndication.

While Big Bang did set a record for dollar-per-episode mark for cable, it remains to be seen whether or not the sitcom will do the same on the broadcast side, since those sales have just begun. The first-cycle most dollars-per-episode record is still held by both The Cosby Show in 1986 and Friends in 1996, with each earning $4 million per episode.

Seinfeld currently holds the all-time record for most revenue earned from a broadcast sale, with $5 million per-episode earned from its second cycle, which ran from 2001 to 2006.