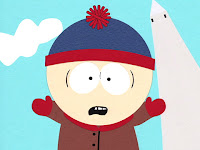 Stan wasn’t the only one up in arms about Comedy Central taking a hatchet job to a recent episode of “South Park.”

For the last few weeks, cable was on a hot streak: SyFy acquired Friday Night Smackdown, stealing it away from My Network TV, while Turner Broadcasting snared both Conan O’Brien and part of the NCAA Tournament.

But on the same day Turner announced it snared some college hoops games away from broadcast, basic cable got slapped with a cold dose of reality: it got a broadcast-like content smackdown, courtesy of Viacom-owned cable network Comedy Central.

The endurable South Park celebrated its 200th episode two weeks ago with a plot centering on celebrities getting revenge on the town who scorned them. In the first of a two-part episode, the Prophet Muhammad  was referenced, angering some in the Muslim community.

The second part aired the following week – titled 201 – with Muhammad in a bear costume. But Comedy Central altered and heavily edited the episode anyway, even censoring Kyle’s speech at the end, which did not even mention Muhammad. In one instance, there was one bleep lasting a whole 38 seconds.

And if that wasn’t enough, Comedy Central pulled scheduled repeats of 201, did not make it available for streaming on Southparkstudios.com, and yet to make it available for sale on iTunes. In addition, they yanked the one episode Muhammad did appear – in Season 5 on an episode titled Super Best Friends, from Netfix’s streaming service, iTunes, SouthParkstudios, and is likely to yank it from the broadcast syndication package (locally, WCIU recently moved South Park reruns to 3 a.m, since the station’s contract to air the show ends in September.)

Is this CBS, NBC, ABC, or even Fox we’re talking about? Nope, this is Comedy Central doing the censoring on the cable we pay for.

And what prompted them to do all this censoring and bleeping? The Parents Television Council? Nope. The American Family Association? Nope.

It was this New York-based RevolutionistMuslim website who did all the complaining, which even went as far to warn the creators of South Park that they could be harmed for even depicting Muhammad as a censored image in part one of the episode, titled 200.

And so, Comedy Central (which should be renamed Coward Central) decided to do the censoring and bleeping to 201, which made the episode practically unwatchable. South Park creators Matt Stone and Trey Parker weren’t happy about the cable network’s heavy-handed editing, and posted this response on their website.

It’s not the first time Parker and Stone had run afoul of the censors. In an episode of 2006’s Cartoon Wars, Comedy Central deleted a scene in which prophet Muhammad was in and replaced by a message from the show stating they couldn’t show the scene, which some thought was part of the plot.

Ironically, Cartoon Wars centered on the TV series Family Guy airing a scene of Muhammad and Cartman trying to pull Family Guy off the air for good (The creators of South Park have gone on record stating their disdain for Family Guy and series creator Seth MacFarlane.)

And even more stupefying, Comedy Central had aired Super Best Friends in which Muhammad was shown in full view, with little or no controversy.

So now I guess we can add this Revolution Muslim site to the levy of “watchdog groups” like the Parents Television Council who continue to make life a living hell for those of us who follow media. And as usual, Big Media and Coward Central cave in to these so-called “watchdog groups”.

With cable and satellite penetration now reaching 90 percent of U.S. homes, here comes the watchdog groups complaining about content, despite the fact that cable channels don’t need a broadcast license to operate. Of course, this doesn’t stop the PTC from complaining about Nip/Tuck.

What all of this proves is that no matter what the platform, Big Media will always shackle you with a ball-and-chain when it comes to content, whether it makes sense or not (and yes, even Conan O’Brien will get the ball-and-chain treatment, though the shackles will be looser on TBS than they ever were on NBC.)

In a TV Week story regarding Turner acquiring rights to the NCAA Basketball Tournament, one commenter wrote that “this likely is the last decade where there will be any difference between Broadcast and Cable TV as far as ratings and influence.”

On the issue of censorship, it looks like we’ve already arrived.

– In the 1950’s and 1960’s, Jackson, Miss. NBC affiliate WLBT often censored NBC News’ stories on the Civil Rights Movement, pretending to have “cable trouble” (in the pre-satellite era.) The FCC yanked the station’s license in 1969 from owner Lamar Insurance when WLBT was found to openly discriminate against African-Americans in its newscasts and programming, even going as far to pre-empt NBC series with African-American performers in them, including Nat King Cole’s variety show, which ran from 1956-57.

– In August 1973, about 40 CBS affiliates pulled the plug on two repeat episodes of Maude titled Maude’s Dilemma, which featured the title character (played by the late Beatrice Arthur) deciding whether or not whether to get an abortion after she becomes pregnant at age 47 in the height of Roe vs. Wade, a controversial subject to this very day. The episodes originally aired in November 1972.

There were protests outside CBS affiliates both for and against airing of the two episodes, which lost sponsors (among those who dropped out were Alberto-Culver, General Mills, and Pepsi.)

– Also in 1973, CBS aired a made-for-TV movie titled Sticks and Bones, a bitter drama about a blind solider coming home from Vietnam who winds up dealing with a lot of family issues and is driven to suicide. More than 90 CBS affiliates rejected the movie, including CBS’ then-owned station in St. Louis (KMOX-TV, now Belo-owned KMOV.)

– In 1992, Bonneville’s KSL-TV in Salt Lake City delayed CBS’ Picket Fences until 11 pm Saturday nights, instead of airing it in its regular 9 p.m. (MT) Friday night time slot. An NBC affiliate since 1995, KSL has refused to air short-lived sitcom Coupling and currently does not air Saturday Night Live, which is shown instead on Salt Lake City’s CW affiliate, KUCW-TV (KSL also did not air Maude’s Dilemma, both in original and repeat episodes as a CBS affiliate.)

– In 2004, Sinclair Broadcast Group pre-empted an episode of Nightline on its ABC affiliates when it featured a tribute to soldiers who died in the 2003 invasion of Iraq.

– Also in 2004, 65 ABC affiliates passed on airing Saving Private Ryan after the network decided not to bleep the movie’s profanities, which came at a time when the FCC was cracking down on fleeting expletives in the wake of that year’s Super Bowl halftime show fiasco.

– In 2006, Eight NBC affiliates refused to air The Book of Daniel, a controversial drama about Christians and the Christian faith which was canceled after four episodes (Ironically, KSL did air this program.)