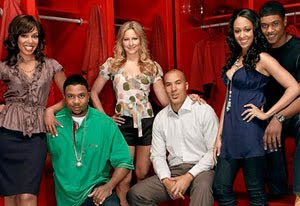 (Note: This is a refurbished and retooled version of a post yours truly wrote on July 1, 2009 – updated to include more recent information, including today’s announcement of “The Game” returning to television. Yes, I’m now recycling posts!)

BET announced today at its upfront presentation to advertisers in New York that canceled CW comedy The Game will make a return this fall to the cable network.

Most of the original cast – including Tia Mowry and Wendy Raquel Robinson – would return to the program, which ran on The CW for three seasons before it was canceled a year ago.

A comic take on ITV’s successful British drama Footballers Wives, the series centers around the women whose husbands (or boyfriends) play for a football team named The San Diego Sabres (a team that could probably beat the real-life Detroit Lions…)

The Game would become the first former live-action network sitcom to be revived on basic cable since The Disney Channel produced a sequel to the classic sitcom Leave It To Beaver titled Still The Beaver in 1985 (the show moved to TBS in 1986 and was retitled The New Leave It To Beaver.)

One thing working in The Game’s favor is today’s cable shows are better produced than they were in the 1980’s and the 1990’s with programs like Sex and the City, Entourage, and Hannah Montana leading the way. However, not working in its advantage is the likelihood of a reduced budget than the program is accustomed to, which could show up on-screen.

This was the result when Airwolf – which ran on CBS from 1984-86- moved to the USA Network in 1987 after two and a half seasons, becoming the first canceled network drama to move to basic cable with new episodes. However, the budget was cut and the entire cast was replaced. Viewers didn’t like what they saw and fled for the exits. Even though this won’t be the case with The Game, at least one cast member (Coby Bell) isn’t expected to return – he recently accepted a gig with USA’s Burn Notice.

The idea for The Game to move the cable actually came from the cast. A new season would make the series more strippable for a possible broadcast syndication run. BET currently holds the rights to the 64 existing episodes where the program has been successful as a weekday strip.

The Game was spun-off from Girlfriends, a sitcom which ran on UPN for six seasons and CW for two. Both shows were created by Mara Brock Akil. Ms. Akil’s husband (Salim Akli) now takes over as showrunner.

Last June, Comedy Central and Twentieth Television agreed to produce new Futurama episodes beginning this year – seven years after Fox canceled the series, becoming the first animated sitcom ever to be revived for basic cable after its network run ended.

Thought: The Game is back, but likely with a reduced budget due to the move from CW to BET. As far as production goes, let’s hope the following doesn’t happen:

This was typical of the early “syndie quickie” first-run scripted syndicated series of the early 1970’s (Dr. Simon Locke, Police Surgeon, The Starlost, The Protectors – shows practically created by PTAR) and early first-run cable sitcoms. With the economy the way it is, are studios this droll to try production techniques like this again?

The Game is the only program to date to be removed from The T Dog Media Blog TV Hall of Shame due to bouncing back from a dreadful first season and a vast improvement in quality in its second and third seasons. Unfortunately, CW pulled the plug at the show’s creative peak. From yours truly’s standpoint, The Game is truly welcomed back.

1 thought on “BET revives "The Game"”