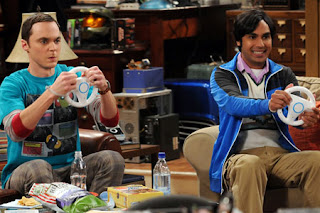 Are these guys worth $4 million per episode? You bet your behind it is.

Is the high-priced off-network sitcom on its way back? With the upcoming sale of The Big Bang Theory, we may soon find out.

Not since the days of Friends, Seinfeld, The Simpsons, and The Cosby Show have we seen a sitcom come close to the $4 million per episode mark in syndication sales. With the economy in a tailspin, stations have been reluctant to pay cash money for anything as of late, let alone an off-network sitcom or a coffee machine in the break room.

But that’s about to change – at least with off-network syndicated sitcoms – with the arrival of The Big Bang Theory, a subject of this Variety article.

The program has been a strong performer for CBS’ successful Monday night schedule – and has taken off since being slotted after Two And A Half Men this season. For the past two seasons, Big Bang had aired in the lead-off Monday night slot (7 p.m. CT), and was moved to 8:30 p.m. this season. Since then, the program has finished either first or a close second in total viewers and in adults 18-49.  Big Bang is produced by Chuck Lorre Productions – the same team who produces Men (and the inane Dharma & Greg, which did not have much syndication success.)


Big Bang Theory has the formula to work for syndication – a multi-cam format (i.e. shot in front of a studio audience); solid performance among adults 18-49 every week; strong, multi-dimensional characters (it doesn’t get any more multi-dimensional than Sheldon Cooper); terrific story structure; and an ensemble cast. These are essential for any program to have success in off-network syndication. Sitcoms ranging from The Andy Griffith Show and M*A*S*H (minus the studio audience, of course) to Cheers and Everybody Loves Raymond had reaped millions in success from this formula.

How much stations and cable nets will pay for Big Bang – will determine how much the show rakes in per episode. The two groups who’ll have a huge say in the matter are Tribune Broadcasting and Fox Television Stations, who own outlets in the top three markets of Chicago, New York, and Los Angeles, and also go head-to head with each other in Philadelphia, Dallas, Washington, D.C., and Houston. Tribune won the rights to Two and a Half Men in 2005, and has reaped benefits from the show since its premiere in syndication in 2007. And Tribune could have the inside track since Men and Big Bang perform very well together on Monday nights, and the syndicator would like to repeat that success on local stations.

On the downside, Tribune is still dealing with bankruptcy issues and making high bid for Big Bang might be difficult. Recently, Tribune renewed Twentieth Television’s Family Guy for a second cycle, but for a lower price than in the first cycle.

Fox on the other hand, could scoop up Big Bang and could help turn their ratings-challenged performance in syndication around – similar to what happened in 1995 when they bought Home Improvement and trumped the long-dominant Tribune stations in access (WFLD here in Chicago did one better by also acquiring Seinfeld.)

But many Fox stations are expanding their news offerings and WFLD is likely to jump in the early-evening news race within the next two years – which means Big Bang could possibly head to Fox’s noticeably weaker My Network TV outlets in its duopoly markets if a sale is made to Fox. A few years ago, Fox outbid Tribune for second-cycle rights to Raymond in five markets where they go head-to-head, including the three largest. Since arriving at MNT stations in 2008, Raymond has not performed well compared to their solid performance on Tribune stations.

In October 2007, Raymond was earning north of a 2 household rating on Tribune’s WGN-TV at 12:30 a.m. Since its move to Fox’s WPWR-TV two years ago, Raymond has aired in as many as four different time slots and never achieved higher than a 1.5 rating.

Another problem for Fox O&Os  is the possibility of Conan O’Brien landing at their parent network in late fringe, which could give Tribune some leverage in acquiring Big Bang. O’Brien landing at Fox means the elimination of two key time slots for syndicated product.

In the cable arena, several networks – including FX, USA, Comedy Central, and TBS – are in the race to acquire the sitcom, which would likely begin airing the show at the same time broadcasters would. Cable could contribute up to a fourth of the $4 million-per-episode possibility, or around one million an episode. But there is a chance a cable net could bid three million for exclusivity – a possibility should broadcasters balk at paying the high license fees and if O’Brien lands at Fox. Keep in mind cable receives two revenue streams – from subscriber fees and advertising, so an exclusive cable buy isn’t too far fetched. On the other hand, the winning cable network could ask for a per-subscriber-fee hike from MSOs, which could cause a backlash from customers in the form of increased cable bills.

But whomever lands the sitcom, one big winner is sure to be Warner Bros. Domestic Television Distribution, who syndicates both Big Bang and Two And A Half Men. Along with the possible three-to-four million haul per episode from the sitcom, there is the revenue from the barter time sold, could fetch millions a year for a minute-and-a-half of barter time, twice a day, eleven or twelve times a week.

And of course… the big winner would be the viewing audience, who would get another quality sitcom to watch every night – an improvement over the current aging crop of off-network series in syndication now and current off-network C-level dreck like Everybody Loves to Hate Chris Payne & His House of Kids.