"Cleveland" off to good start 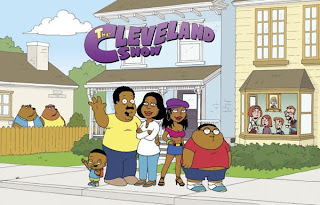 Fox’s premiere of The Cleveland Show, featuring the next-door neighbor of The Griffins who moved to Virginia to start a new life drew 9.4 million viewers and a 4.9 rating in adults 18-49, growing 17% from its Simpsons lead-in.

The premiere of Cleveland coincided with the season premieres of The Simpsons, Family Guy, and American Dad, with the entire block up from comparable year-ago levels. And keep in mind Fox did not have a late afternoon football game in most markets (with the notable exceptions of Chicago, Philadelphia, New Orleans, and Buffalo.)

The big surprise here is Brothers, did better its its encore presentation (2.1) than it did in its Friday premiere (1.0). If I were Fox, I’d move this to Sunday night.

The big losers on this night were the season premieres of veterans Extreme Makeover: Home Edition, Desperate Housewives, Cold Case,  and Brothers and Sisters – all down from last year, with Housewives and Cold Case showing the biggest decreases.

Locally, we all know who the winner is: Da Bears. In Chicago, the late-afternoon game pulled a household rating and share of 27.8/51. (scroll down.) The top-prime show was the Colts-Cardinals game with a, while the top non-sports attraction of the night was Desperate Housewives, with a 9.8/15.

But the biggest local ratings upset of the night was Brothers out-performing the entire Animation Domination block, with a 7.7/14. The Simpsons came in next with a 7.1/12, followed by Cleveland with a 7.0/11.


What do you think about The Cleveland Show? Not much, apparently. The jokes were surprisingly stale, though there were some sweet moments in the show. But an overall disappointment.

But keep in mind Happy Days, Everybody Loves Raymond, Seinfeld, Cheers, and even the show Cleveland spun-off from had weak pilot episodes – and in fact, first seasons. And each of these shows became television and pop-culture mainstays. And internet geek reaction has been surprisingly positive. There is room for improvement, and yours truly is willing to give it the benefit of the doubt since the show has already been picked up for 34 more episodes.

On Twitter, yours truly initially gave The Cleveland Show a D-. But upon further review, I decided to up to a D+.