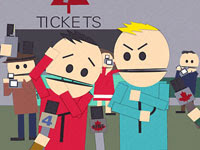 It’s a time-honored tradition among animated comedies to rip on Canada, so it’s no surprise South Park put the entire country on strike in last Wednesday’s episode to poke fun at the WGA labour (yes, labour) mess.

When the South Park boys found out Deal or No Deal host Howie Mandel (who’s Canadian) was replaced by Jim Belushi, they quickly sprung into action (all right, I made that up – I just wanted to take another shot at According to Jerk boy…)

They made an video featuring Meg Griffin – oops, I mean Robert Barone – oops, again – I mean Butters, put it on a popular video website, and made a lot of money to give to Canada so they can settle the strike and watch new episodes of their favourite Canadian comedy, Terrance & Phillip (that’s still on? Must be in its’ 19th season…)

The boys later met with the World Canadian Bureau, whose initials – for some strange reason – were WGA.

Reaction to this episode was mixed at best, while yours truly thought this episode was somewhat disjointed (last week’s episode with the title Major Boobage was actually funnier.) However, it got the job done when it took a shot at the WGA heads.

Did you catch this?: In a scene when the boys were channel surfing, they landed on a rather familiar show in which Cartman raced to the set and quickly turned it off. Guess he doesn’t care for Wait Til Your Father Gets Home either… (LOL… was that Chris Griffin or Chet Boyle?)