The Sun-Times is a disgrace to Chicago

On a day we have immigration marches across the country and a pending veto by President Bush on the Iraq war expected to go down today, THIS is what the Sun-Times lead with this morning: 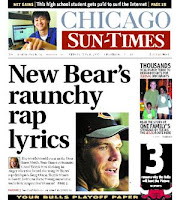 What utter crap. This paper is turning into a joke with each passing day. The way things are going, they will soon become a local version of The Onion. And The Onion is a more enjoyable read than the Sun-Times.

Is this going to entice people of the next generation to buy their paper? They’re smarter than that. They smell a fraud a mile away.

Maybe those FCC hearings on media consolidation should be held here. In Tampa, residents are already giving the agency an earful on the incompetent job the local press is doing.

It seems like the Sun-Times is still being run by Rupert Murdoch, who bought the paper in the mid-1980’s and sold it within two years.

Whoever is editor at the Sun-Times SHOULD BE FIRED FOR THIS. All they care about is moving papers and dumbing down Chicago. I pointed this out in a Think Tank piece last month about the paper’s changes.

Let’s Get Into It. How about jumping out of it and not over a shark like you guys usually do?

UPDATE: I left a message on the Full Court Press blog about this matter. You can access this by clicking here and scroll down until you see Terence and the time 3:20 p.m. in the byline.