Master Shake and friends to the big screen 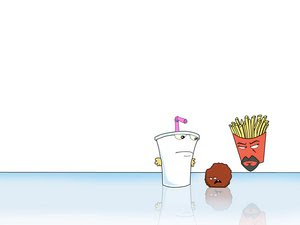 While America has to wait until July for The Simpsons to hit the big screen, and Family Guy’s movie eschewed theaters altogether for the safety of your living room via DVD, The Aqua Teen movie will be hitting theaters this March, called The Aqua Teen Hunger Force Colon Movie Film For Theaters. (I swear I’m not making this up.)

Based on the hilarious Adult Swim show Aqua Teen Hunger Force, the script is written by two of the shows creators, Matt Maiellaro and Dave Willis. Given the history of television programs that were on the air and that released a feature film simultaneously (Batman [1966], The X-Files, South Park, Scooby-Doo, Rugrats, Beavis and Butt-head, and the upcoming Simpsons movie), this may have the potential for the franchise to “Jump the Shark” (if it hadn’t already- although Scooby Doo fans would say their show did on Sept. 7, 1979 when Scrappy arrived.)

Can they stretch an 11-minute episode to a 80-minute movie? We shall see, right here on The T Dog Blog on Your Computer Screen For PCs and Macs Without Justin Long and the Nerdy Guy In The Glasses.