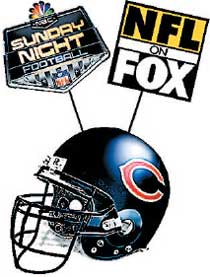 Interesting article in the Trib today from Ed Sherman about the new flexible scheduling policy that came into place this year with the league new television contracts. This involves the Chicago Bears, and their successful undefeated season thus far.

Fox isn’t pleased that the game between the Bears (media market #3) and the 5-2 New York Giants (media market#1), orginally scheduled for a 12:01 Central Time start on Nov. 12, was moved by the National Football League to 7:15, meaning that the game won’t be televisied by Fox but by NBC instead.

NBC of course, got back in the NFL game for the first time in eight years by acquiring the Sunday Night Football franchise that was formerly was on ESPN. NBC paid the NFL $600 million dollars. Part of that new deal came with the guarantee of marquee match ups… (i.e. the ones with playoff implications) — and the right to pluck one marquee game from either CBS or Fox’s Sunday afternoon lineups late in the season.

Even though Fox hasn’t protected the Nov.26 Bears-New England Patriots game (NBC has slated Eagles-Colts for that night), there is a possibility that NBC might go back to the league and ask for that game — because the Eagles are struggling and NBC fears that the game has the potential to become a one-sided affair.

As it stands for now, Fox will carry the Bears-Patriots game on Nov. 26 at 3:15pm (originally a noon start) and also plans to carry the Bears-Vikings game the following Sunday.

As we say in television land, Stay tuned.