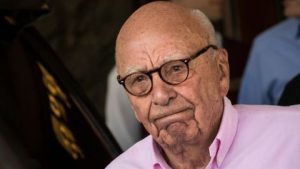 After splitting a decade ago, he wants to reunite

It appears Rupert Murdoch wants to bring back together the two companies he separated eight years ago.

Late Friday, reports surfaced on Murdoch doing exactly that – Fox Corp.’s board of directors received a letter from him and the Murdoch Family Trust about  reuniting Fox and News Corp. once again and formed a committee to look into the possibility.

“The Special Committee, consistent with its fiduciary duties and in consultation with its independent financial and legal advisors, will thoroughly evaluate a potential combination with News Corp. The Special Committee has not made any determination at this time, and there can be no certainty that the Company will engage in such a transaction,” Fox said in a statement.

Media companies splitting their different properties were commonplace from the mid-2000s to the mid-2010s, in order to unlock their financial value. Originally formed in Australia, News Corp. took over 20th Century Fox in 1985 and bought Metromedia’s TV stations in 1986 (including WFLD-TV) to form the nucleus of the then-upstart Fox network.

Following other media companies who did likewise – Viacom/CBS, Tribune, Scripps, and Gannett, News Corp. split into two separate companies in 2013, with News retaining the Wall Street Journal and New York Post publications and the newly-named 21st Century Fox, owning the entertainment and broadcast properties. In 2017, 21st Century Fox sold most of their properties to The Walt Disney Company, retaining Fox, FS1/FS2, Fox News, My NetworkTV, and their local owned-and-operated stations to form the new Fox Corp. in a deal that closed in 2019.

The same year, Viacom reunited with CBS Corp. to become ViacomCBS, later rechristened Paramount Global. The other two companies who split were sold off to others as Tribune’s newspapers went to Alden Global Capital and its TV stations were sold to Nexstar while Gannett’s former TV stations are in the process of being sold to Standard General.

If Murdoch does decide to reunite his properties, it would certainly be easier this time than it was when he bought Metromedia’s TV stations as the FCC eliminated the cross-ownership rules in 2017, which prohibited the ownership of a newspaper and TV/radio station in the same market unless grandfathered in and was upheld by the U.S. Supreme Court last year. Murdoch had to sell the Chicago Sun-Times in 1986 in order to acquire WFLD, but did manage to get waivers from the FCC to hold on to the New York Post during this time.

Fox has made some acquisitions since the Disney sale, acquiring the company who produces animated series Bob’s Burgers and The Great North and Tubi, a video-on-demand streamer that gives them a least a presence in the ever-growing streaming field. Fox also has expanded its presence in first-run syndication by acquiring TMZ and its online properties from the former Warner Media, and added game shows You Bet Your Life and Pictionary to its portfolio, providing programming to its Fox-owned TV stations and others.