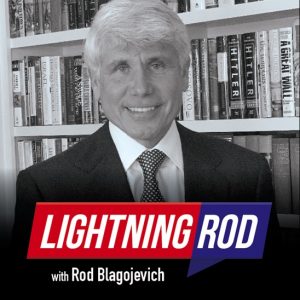 Do the time, land a radio show

It seems there’s a common thing in Chicago radio where if you go to prison, you wind up with a job in radio.

The perception was never truer than on Thursday when Cumulus Media – owner of conservative-talk WLS-AM, classic hits WLS-FM, and alternative WKQX-FM in Chicago, announced they signed former Illinois governor Rod Blagojevich to host a podcast called The Lightning Rod every Wednesday beginning on May 20.

Blagojevich was sent to prison for trying to sell a senate seat vacated by Barack Obama when he became President and was sentenced to 14 years. Current president Donald Trump commuted his sentence in February (of course, appearing on Trump’s Celebrity Apprentice back in the day didn’t hurt.)

Thanks to the 45th President springing him out, Blagojevich has become a fan of Trump, labeling himself as a “Trumpocrat”.

Cumulus market manager Marv Nyren – the same one who brought Mancow Muller back from the gutter last year despite past legal wrangling between the two, said in a statement “Blagojevich is a polarizing political figure who served his time and now he’s serving up the truth, only on WLS-AM. It will be messy, it will be raw and it will be ROD as you have never heard him before.”

Blagojevich has appeared on WLS-AM before; he hosted a few times between 2009 and 2011, before he went to prison.

“After a long exile, I made it home”, the former Governor said in a statement. “It’s a brand new day. I’m finally free and fired up to speak my mind, provide insights from the inside, and share what I’ve learned from the school of hard knocks.”

Cumulus declined to comment further beyond the press release. Despite Nyren’s odious claim in the press release about him being on WLS-AM, he will not appear on the station’s actual air, at least for now. His weekly show is available only via download and on-demand listening, and is available on a variety of platforms including iHeartRadio and iTunes.

Hiring convicted felons to host radio shows is nothing new – in fact, it’s basically unique to Chicago. Former alderman Cliff Kelley did a daily radio show for WVON-AM for years, while WGN-AM employed another disgraced alderman, Jim Laski from 2008 to 2010 during the Sam Zell-Randy Michaels era at Tribune Broadcasting.

Perhaps the best thing about this venture is Blagojevich’s show is it’s only available on podcast and on-demand streaming, so he’ll be basically easy to avoid. Of course, there will be a few who is curious to see what he has to say. Whether this would turn into a full-time gig for Blagojevich remains to be seen, but this news is already “bleepin’ golden” for Cumulus Chicago.