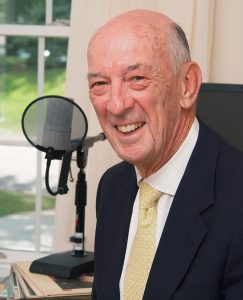 Longtime Chicago radio personality Clark Weber passed away Sunday morning from complications due to cancer at an Evanston hospice. He was 89.

Weber was a legendary showman, getting his start in Chicago radio at ABC’s WLS-AM in 1961, at the Top 40 powerhouse known as “The Big 89”. In August 1965, Weber and evening jock Ron Riley introduced The Beatles to Chicago in front of a raucous crowd at Comiskey Park. A Milwaukee-area native, Clark began his career in Milwaukee at the old WFOX in 1948, seven years before the rock era began.

Weber shifted to WCFL-AM in 1969 to replace the failed Howard Miller show in mornings, and later moved to NBC’s WMAQ-AM in 1971.

Tired of spinning tunes, Weber made a successful transition to talk radio in 1973 when he joined WIND-AM and had a thirteen-year run at the Westinghouse-owned station, ended due to a sale and a format change in 1986. From there, he went to WJJD and WAIT before retiring from radio altogether.

In addition to his radio career, Weber also was involved in advertising. He founded Clark Weber Associates, an agency devoted to targeting people aged 55 and up. Weber also hosted a one-minute commentary called A Senior Moment, airing on 30 stations nationwide and online. At 84, Weber finally called it a career, retiring altogether.

Among his accolades, Weber was inducted into the Illinois Broadcasters Hall Of Fame and won several advertising awards.

Weber is survived by four daughters and twelve grandchildren and two great grandchildren. His wife Joan died two years ago, also from cancer.