We have an update on the latest with the Cubs’ new Marquee Network and Dish…and I’m guessing those negotiations aren’t going well.

In an interview with the Tribune’s Eric Zorn (a rather pointed opinion piece urging Dish not to carry the channel because of the Ricketts family’s right-wing stances), a Dish representative didn’t seem too keen on carrying the new regional sports network: “Our back-of-the-envelope math tells us that the Marquee Network would cost subscribers between $50 and $70 a month if it simply were sold on its own,” said Dish group president Brian Neylon. “Our view is that those people, the vast majority of our customers, shouldn’t have to subsidize Cubs fans. That’s why we say the business model of regional sports networks is broken.”

Already Dish is in disputes with RSNs NBC Sports Chicago, Colorado’s Altitude, and the 21 Fox regional sports networks, whom Sinclair Broadcasting purchased from Disney earlier this year. Sinclair of course, is a partner with the Cubs in Marquee’s operations.

What this tells us is Dish isn’t exactly willing to negotiate with Marquee – namely because any deal with the Cubs’ new network for them must also include one for the Fox RSNs. Earlier, Dish struck deals with Charter, Mediacom, and AT&T to carry the new Cubs network – in some cases, tied in with Sinclair’s 191 local TV stations, include a few downstate.

So as I’ve said before in this space, if you are hoping for Dish to carry Marquee, you might just want to switch to DirecTV or Mediacom (if your area is served by them) or try another option. But with less than three months to go until launch and notable providers such as Comcast, RCN, and WOW still holding out – Marquee might want to get a move on.

In an almost complete sweep of its daytime lineup, the Fox Television Stations has renewed its three syndicated shows for next fall: veterans Divorce Court, Dish Nation, and newbie 25 Words or Less.

“Every day, America welcomes us into their homes to laugh, cry and play. We are part of their everyday ritual and we look forward to being there for a long time to come,” said FTS executive VP of programming and development Stephen Brown in a statement.

In Chicago, all three shows air on either Fox-owned WFLD (Fox 32) or sister station WPWR (My50) in various daytime periods. This brings the number of programs the Fox-owned stations have renewed for next fall to eight, including Wendy Williams and a package deal of shows from Warner Bros., including Extra and TMZ.

Fox Television Stations syndicates all three shows under the name Fox First-Run as the station group was one of the properties retained by Fox Corporation as much of the company was sold to The Walt Disney Company including Twentieth Television, home of The Simpsons, Modern Family, Last Man Standing, and Bob’s Burgers. Meanwhile, Disney operates Disney-ABC Domestic Television Distribution separately, with black-ish, Tamron Hall, and Live With Kelly and Ryan in its stables.

But this may not be for long – 13 years ago, CBS Corporation decided to merge the separate King World Productions and CBS Paramount Television syndication operations to form CBS Television Distribution in order to reduce expenses. The company sells the national ad barter time for all three Fox First-Run shows, not to mention Debmar-Mercury’s programming. 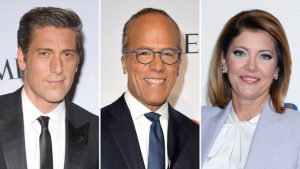 If you are up late at night, you might have noticed seeing David Muir, Lester Holt, and Norah O’Donnell. That’s because the three major networks have decided to let a few affiliates and owned stations to run repeats of their national network newscasts in overnight hours.

The trend started back last summer when the NBC Nightly News With Lester Holt starting airing after Later on the network’s owned-stations, including NBC 5 (WMAQ-TV) here. In October, the ABC-owned stations (including ABC 7, WLS-TV) did likewise, airing overnight repeats of ABC World News Tonight With David Muir. And just two weeks ago, several CBS-owned stations (including CBS 2, WBBM-TV) followed suit with The CBS Evening News with Norah O’Donnell. All three shows continue to air at 5:30 p.m. local time, as they done for decades.

Several affiliates of the Big 3 networks have also decided to take repeats of the network newscasts overnight, including WFAA (ABC) in Dallas, WTAE (ABC) in Pittsburgh, WKYC (NBC) in Cleveland,and WGRZ (NBC) in Buffalo.

So why are the networks doing this in the 24-hour cable news era?

According to Variety, a reason may be because they want to cume the ratings together to sell to advertisers. But adding broadcasts of dated news shows overnight may not be the best way to do so. Keep in mind all three newscasts are available online for later viewing and also available to stream and listen to via podcast.

Even more baffling, in CBS and ABC’s cases, the newscasts lead into the networks’ live overnight news shows.

So while it is understood the networks’ are trying to get the most out of their early evening newscasts, airing half-day old network newscasts is about as appealing as eating half-day old muffins.

Well, that was quick: Disney’s new streaming service was a popular item when it launched last Tuesday, achieving ten million sign-ups already – all in just 24 hours.

By comparison, sister service Hulu didn’t achieve its ten millionth customer until 2016 while Netflix didn’t pass the benchmark until 2009. Launched in  2014, CBS All Access has yet to even reach it.

But these numbers could be goosed: Verizon has decided to give their customers free Disney Plus for a year, as their commercials attests (AT&T customers could expect a similar deal when HBO Max launches) and a large number of the sign ups are for the seven-day free trial. It remains to be seen if these signups translate into subscriptions.

The new streaming service did launch as advertised on November 12, but not without hiccups – many users weren’t able to log in because because of a flood of people using it. And Simpsons fans were complaining about older episodes of the series not being in their correct aspect ratio (16:9 widescreen as opposed to 4:3, the format the series was originally produced in), chopping off the top and bottom of the screen.

The sub numbers are from the launch in the U.S., Canada, and the Netherlands; Disney Plus is scheduled to launch in Australia and New Zealand this coming week and expand to Western Europe next year. Overall, a very good start for Disney Plus as a nice family-friendly programming option (Simpsons and Marvel stuff aside). 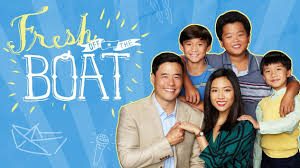 Pink slips were recently handed out to two prime-time shows: ABC’s Fresh Off The Boat and Fox’s reboot of BH90210.

Boat became the longest-running prime-time sitcom featuring Asian-Americans, amassing 108 episodes in its six-season run. But controversy erupted when the show received a last-minute renewal last spring, prompting one of the series’ stars to lash out. Constance Wu wasn’t happy with the news and complained openly on social media with profane tweets (later deleted) as she was forced to decline a project that she wanted to participate in.

Now buried on Friday night amid declining viewership, the show’s final episode is scheduled for February 21. While it is unusual for a veteran show to get canceled in mid-season, it has happened before – after a terrible ratings start, NBC canceled long-running western Bonanza in November 1972 and left the airwaves in January 1973. Approximately a year later, ABC pulled the plug on Room 222 and Love American Style, evicting them from the network’s Friday lineup in January 1974.  Rhoda – which achieved a viewership record for a wedding episode early in its run, was canceled by CBS in December 1978 midway through its fifth season as the series sat at the bottom of the ratings.

Despite 108 episodes in the can, there is no word on any future syndication prospects as the series has yet to make a sale. Most local stations are exiting the off-network sitcom business while cable networks are loathe to spend any money on reruns as linear TV ratings continue to dwindle.

As for BH90210, the loose take on the original 1990-2000 drama about the cast of the series trying to reboot the show didn’t click with audiences this summer (or maybe it confused them), averaging less than four million viewers in live-viewing figures. A similar “inside take” TV series (Cult) was canceled by The CW in 2013 after just two months.