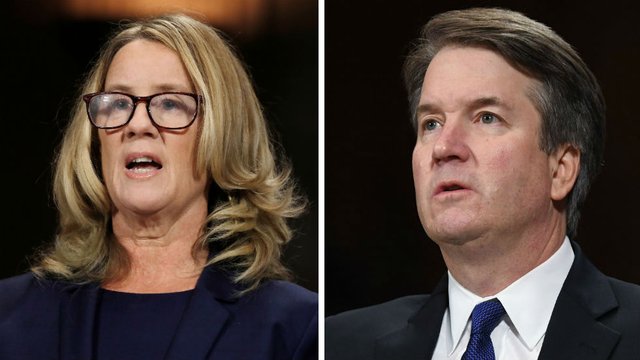 Live coverage of The Kavanaugh hearings at the Senate Judiciary Committee drew an average of 20.4 million viewers across six networks Thursday between 9 a.m. and 6 p.m. according to Nielsen. The cable news networks drew the biggest ratings with Fox News averagin 5.7 million viewers for the entire day, beating rivals MSNBC (2.9 million – its best daytime showing ever) and CNN (2.5 million) combined. ABC led the broadcast nets with 3.6 million.

Numerous syndicated programs were pre-empted Thursday (and some were also pre-empted the day before because of President Trump’s news conference) and will likely be impacted once final numbers come out in two weeks. Of note is two new syndicated programs (Face The Truth and Caught In Providence) were not pre-empted in the Chicago market since they air on WCIU and WPWR respectively, with neither programming any news shows in daytime. Yesterday’s testimony from Dr. Christine Ford and Judge Brett Kavanaugh featured more drama than any court or talk show, even more so than Dr. Phil and Judge Judy and was bordering on Jerry Springer-like antics at times.

The spillover from the testimony benefited the cable news networks Thursday night, even topping its broadcast network television competitors at times among total viewers. Fox News’ nightly lineup had a 0.7 rating among adults 18-49, with the block averaging near six million viewers – outdrawing NBC’s and ABC’s entire prime-time lineup in total viewers, making a tough week for the broadcast networks even together. Fox News’ coverage of the Kavanaugh hearings in late afternoon drew an 0.9 rating and averaging around 7.5 million viewers. Yes, you can’t sell total viewers but the numbers are still concerning if you’re a competitor.

Turning to the other big ratings story, the debut of Thursday Night Football on Fox was a ratings winner for them and NFL Network. The game drew a 4.8 rating and 22 share between 7:23 p.m. and 10 p.m. Central and 14.45 million viewers. The numbers are flat from last year’s TNF matchup on CBS, which drew a similar 4.8 rating and 14.6 million viewers. Last night’s game was between the Minnesota Vikings and Los Angeles Rams, with the Rams prevailing 38-31.

As for the rest of the night:

– CBS’ The Big Bang Theory drew a 2.2 rating and 12 million viewers – down considerably from last year with Young Sheldon following with a 1.6 and Mom with a 1.3. This lead-into the 11th season premiere (yes, 11th) of Murphy Brown with a 1.1 rating in the 18-49 demo. With no youth appeal (the premiere earned only a 0.4 rating in the 18-34 demo) and no “red-state” appeal, the program’s forecast for success is very limited. Reviews were mixed (even though I’ve watched fewer than ten episodes of the original, I liked the season premiere and has a nice cameo by “you-know-who”.)

SWAT finished the evening with a 0.7.

– NBC’s critically-acclaimed Good Place drew a 1.0 rating, but only 3.4 million viewers behind Fox News and MSNBC’s Rachael Maddow. This lead into the twentieth season premiere of Law and Order: SVU with a 1.1 rating, up 10 percent from the lead-in.

– ABC’s season premiere of the long-running Grey’s Anatomy drew a 1.9 and came within striking distance of Big Bang in the demo, despite drawing 6.9 million viewers. But the season premiere of How To Get Away With Murder dropped a whopping 58 percent from Grey’s lead-in, with a paltry 0.8 rating and tied MTV’s Jersey Shore: Family Vacation.

-The CW was not competitive as they continue to sit out until October with weak-kneed repeats of Supernatural (0.2) and The Originals (0.1).