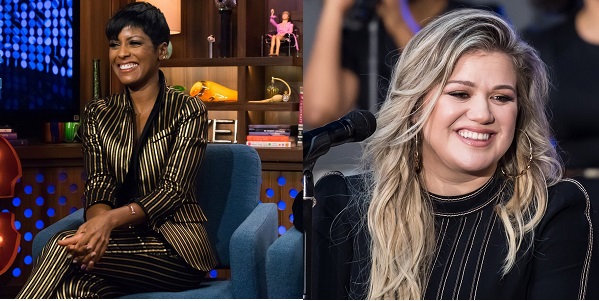 Development swings into full gear as stations prepare for 2019

With the new fall syndication season beginning in less than a month, distributors are already lining up for fall 2019 – at least in daytime.

Last week, two faces took in the lead in development: NBCUniversal has signed American Idol winner and The Voice judge Kelly Clarkson for a talk show project, while Disney-ABC did the same and signed former WFLD anchor and Today co-host Tamron Hall.

The development action comes as time slots are becoming available for September 2019, and some shows are preparing to leave the air. For one, two talkers from NBCUniversal – two-season Harry and longtime veteran Jerry Springer were canceled this season, with the latter heading to CW in reruns beginning September 10.

Also, the future of another NBCUniversal talker – Steve Harvey’s revamped Steve – is reportedly in trouble as the series’ move from Chicago to Los Angeles hasn’t paid off in increased ratings and revenue.

Clarkson shot a talk show pilot for NBCU on Friday, and may sell the program for a fall 2019 debut – though the company said the show could air on another platform. If it goes the syndication route, it could easily slip in for Steve on NBC-owned stations if his show does not return. Harvey leads into Ellen in most NBC-owned markets, including Chicago at WMAQ-TV.

NBCU did not provide any further details about the project.

Meanwhile, Disney-ABC signed Hall a development deal for a project previously developed by The Weinstein Co., before sexual harassment allegations against founder Harvey Weinstein sent the company into bankruptcy. Though her agent William Morris, Hall was able to sign a deal with Disney. “I’m so thrilled to partner with Disney/ABC to create a daytime television show that’s unconventional, fun, intimate, and sometimes even raw,” said Hall in a released statement. “My new partners appreciate and respect the relationship I’ve built with my audience and know that if we create television worth watching, they’ll join us for the ride. I’m so grateful and excited for this next chapter. The landing makes the leap of faith so worth it!”

Hall was unceremoniously dumped by NBC’s Today in 2017 after the third hour she co-hosted with Al Roker was given to Megyn Kelly, despite strong ratings. Hall also produced several specials for NBC News, MSNBC, and Investigation Discovery. Beforehand, she was with Fox’s WFLD as morning anchor for a decade.

Disney-ABC has had trouble developing a successful talk show to compliment its morning Live franchise over the years with Katie and The Fab Life recent notable flops. The latter saw host Tyra Banks depart just two months into its run.

Like Clarkson’s deal with NBC, a sale to ABC’s station group isn’t guaranteed. Currently, Disney-ABC has company-syndicated viral clips-show Right This Minute and the aging Who Wants To Be A Millionaire in daytime slots on the O&Os and Hall could easily slip in. But in Chicago, Windy City Live has the 1 p.m. time slot with Minute airing in overnight slots at ABC-owned WLS-TV and Millionaire airing at 2 p.m. on Weigel’s WMEU-CA (The U Too). If Hall’s program clears the ABC O&Os, it’s possible WLS-TV would not be part of the deal, leaving other Chicago stations as possible alternatives. WLS aired Katie at 3 p.m. for two years and not only lost to Ellen in the ratings, but scored historic lows in the time slot – dating back to the early 1980s when the station was still airing chopped-up and badly-edited afternoon movies.

With these three projects – and likely more to be announced between now in January, stations are once again looking to freshen up their daytime skeds in order to keep viewers from heading toward other alternatives. While syndicators have mostly struck out with big-name daytime talkers in recent years, a recognizable name is still more valuable to stations and advertisers than a no-name one.