The CW returns to Sunday nights 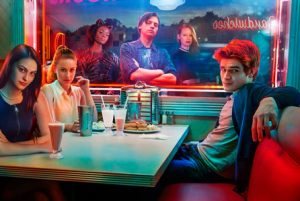 Despite low ratings, “Riverdale” is generating a lot of buzz and acclaim for The CW.

After nearly a decade, The CW is back in the Sunday night race

Signaling they are not going anywhere, The CW announced Wednesday their intentions to return to programming Sunday nights after a nine-year hiatus.

The expansion gives the network twelve hours a week to program, all in primetime beginning this fall. The move comes as The CW has received increasing critical acclaim and buzz for its dramas, notably Jane The Virgin and Crazy Ex-Girlfriend and the new Black Lightning. Unlike the other four major networks, The CW does not plan to program the 6-to-7 p.m. (CT) time slot as it remains with affiliates.

“By expanding to six nights, The CW is now able to give our fans even more of the series they’re so passionate about,” said CW president Mark Pedowitz. “Broadcasting remains the foundation of our multiplatform approach to bringing our programming to viewers. Over the past seven years, The CW has added more than 80 hours of original scripted programming to its schedule–now that number can continue to climb, as we grow our broadcast lineup, and continue to add content on every platform.”

Affiliates were supportive of the move. “As one of the largest CW affiliate groups, we are excited to see The CW Network reaffirm its commitment to broadcasting by expanding its schedule to Sunday night,” said Sinclair Broadcasting president and CEO Chris Ripley. “We value our relationship and look forward to an even stronger audience following with more of The CW’s popular primetime programming.”

Sinclair is in the process of acquiring Tribune Media, who owns CW affiliates WPIX in New York, KTLA in Los Angeles, KDAF in Dallas-Fort Worth, and WDCW in Washington D.C., among others. Once the acquisition closes, Sinclair would own the largest number of CW affiliates in the country.

The CW was formed in 2006 from a merger between The WB and UPN, with the latter owned by CBS. The CW is a 50-50 partnership with CBS and Warner Bros. with CW’s schedule dominated with programming from CBS Television Studios and Warner Bros. Television. The CW initially programmed six nights a week including Sundays, but ratings for the block – airing from 4 p.m. to 9 p.m. Chicago time were anemic.

The last time The CW had a Sunday block, it was outsourced through Media Rights Capital. One of their shows, “Easy Money” lasted just five weeks.

At the request of Tribune Broadcasting as it was seeking a somewhat older demo to lead into its newscasts, The CW opted to outsource its Sunday night program block to Media Rights Capital in 2008. But the results were disastrous as series Valentine and the Sopranos-like Easy Money were canceled after five weeks after averaging less than a million viewers each and CW reclaimed the block shortly thereafter.

This is what I wrote regarding the ratings for both failed shows: “Both programs had achieved numbers usually seen for late-night infomercials and religious programming – really bad. And I mean WJYS-TV, Channel 62 bad. Yep, you know you failed when your show can’t even outdraw Joel Osteen and Paula White Today.”

Additionally: “Ratings for the shows were so atrocious they were often outdrawn by religious programming airing earlier in the day on some of these same stations – not to mention the MRC block’s ratings were down from already-invisible numbers The CW itself put up last year. Some of the MRC shows went into reruns already during the November sweep periods as the studio canceled bombs Valentine and Easy Money.”

This time however, The CW is confident it can compete on Sunday as ratings for entertainment programming on many networks have softened considerably. Fox’s Sunday night lineup (Simpsons, Family Guy) isn’t the same ratings jugglenut as it was in the past (and the future of those shows are up in the air as Fox is selling its entertainment division to Disney), and AMC’s Walking Dead and Bravo’s Real Housewives Of Atlanta both have seen significant ratings declines. If the CW thinks they can compete on Sunday nights, this is absolutely the right time to do it.

2 responses to The CW returns to Sunday nights