Also: Sinclair passes on O’Reilly; Grim reaper closing in on WYCC; World Series a ratings hit; The Twilight Zone to be rebooted. Again.

Given the huge number of items making news this week, it’s time for another edition of The Media Notepad:

Illinois Attorney General Lisa Madigan is among those calling for the Sinclair-Tribune deal to be rejected. According to Broadcasting & Cable, Madigan and her fellow colleagues from Maryland, Massachusetts, and Rhode Island believe the merger “fails to further the public interest by allowing for increased consolidation that will decrease consumer choices and voices in the marketplace.” The Attorney Generals also fear the deal could raise cable prices for consumers. They are urging the FCC to block it – or at least postpone the decision until the legal challenges on the UHF discount were completed.

Meanwhile, the National Cable Television Cooperative – who represents smaller cable companies such as Wide Open West (WOW!), also cast its thumbs down on the deal, saying it would hurt small cable operators in retransmission negotiations. Many cable operators opposite the deal, fearing Sinclair would have significant leverage over them in retransmission content negotiations (the amount of money they pay to carry the broadcasters’ signal.)

On the flipside, Chicago’s Central City Productions endorsed the deal, given Sinclair’s support of the company’s African-American programming efforts such as Our World With Black Enterprise and Hispanic College Quiz. Central City also produces the Bud Billiken Parade for ABC-owned WLS-TV.

On a related note, Madigan announced recently she is not running for re-election for the office.

And speaking of Sinclair, don’t look for the controversial broadcaster to hire O’Reilly after all. During an earnings conference call Wednesday, Sinclair CEO Chris Ripley said O’Reilly approached Sinclair for a job, but apparently passed. The news should come as a relief to stations as O’Reilly would likely deliver  a 55-plus audience to them and wouldn’t be compatible with Fox or CW affiliates – not to mention O’Reilly is an advertiser repellent due to sexual harassment charges.

You’ve heard of “Franken-FM” station (on the 87.7 FM frequency when the FCC considered getting rid of it) but a “Franken TV” station? That’s what WYCC has become as the station is the process of winding down operations as they sold their spectrum in the incentive auction. As a result, the stations dropped PBS programming two weeks ago and is airing MHz Worldview programming (already available on digital channel 20.3) 24/7 in its place.

Viewers can still view PBS programming on WTTW and its numerous digital subchannels and Northwestern Indiana’s WYIN-TV (known as Lakeshore Public Media), depending on where you live in the Chicago area. WYCC still hopes to strike a channel-sharing deal with WTTW, but chances are becoming slimmer and slimmer on that front. If it does happen, MHz Worldview would join WTTW’s diginet lineup branded by WYCC.

Run by The City Colleges of Chicago, the station is now down to only a handful of employees with the station is expected to sign off on November 27. All local programming on WYCC has been suspended permanently. 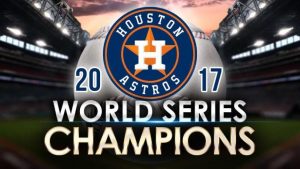 Regarding this year’s World Series ratings, let’s get one thing out of the way first: The numbers are down from last year across the board when the Chicago Cubs appeared and their historic victory. With that said, the Dodgers-Astros matchup was a home run for Fox, averaging 18.7 million viewers and a 10.6 household rating with a 5.0 among adults 18-49. Game seven of the Astros’ clincher drew 28.2 million viewers and a 8.2 rating among adults 18-49. The World Series could likely top the week as Sunday Night Football features the 3-5 Oakland Raiders and the 4-3 Miami Dolphins, led by former Bears QB Jay Cutler – not exactly a great rematch of the 1973 AFC Championship Game.

In Houston, Game 7 delivered a 47.1 for KRIV in Houston – the highest non-football rating in the history of the station, and eclipsed the 45.3 earned during Game 3 of the 2005 World Series, where they were defeated by the eventual champion Chicago White Sox in a four-game sweep. Remember when the Astros once had a 0.0 rating for a late September 2013 game (when the team finished with more than 100 losses?) My oh my how times have changed. The Astros World Series’ victory is the first for its the franchise in its 55-year history.

In Los Angeles, KTTV (home of Dodgers’ telecasts from 1958-92) earned a 36.7 rating, down tremendously from the 42 rating the station achieved for Game 7 for the 2002 World Series featuring the team’s I-5 archrival down the freeway, the Anaheim Angels – now named the Los Angeles Angels of Anaheim. Or something like that.

Both KRIV and KTTV are owned by Fox.

Get ready for yet another revival of The Twlight Zone – CBS is planning to launch a new version of the Rod Serling classic anthology series on its paid subscription service CBS All Access – this time with comedian Jordan Peele. No further information was made available.

The original series was sold into off-network syndication by CBS Films (now CBS Television Distribution) in 1965.

There is no word if science-fiction writers are involved in the new project – during the original and the ’80s version of the show, several known sci-fi writers were involved in the show, including Richard Matheson, Ray Bradbury, Harlan Ellison, and J. Michael Straczynski (whom I saw at a C2E2 panel in 2012.)

Both Serling and Ellison had battles with CBS over Zone episodes – in 1960, Serling fought with then president James Aubrey about the show’s production costs, where as six episodes during the 1960-61 wound up shot on videotape (when those episodes went into syndication, they were converted to kinescope, making the picture quality a lot left to be desired.) Ellison meanwhile, battled with the network over a script he adapted 1985 Christmas episode about an obinxous Snata Claus.

Peele (of Comedy Central’s Key & Peele fame) directed and starred in the theatrical Get Out, described as a African-American version of The Twilight Zone.